In the following topic, several phonological processes which occur in casual Dutch will be described. As most linguistic phenomena, the ) of speech, too, is a gradual matter. However, generally, a three-way division is drawn into formal, semi-formal, and informal speech. The latter, also referred to as casual speech, can, according to Labov (1972), be defined as "every-day speech used in informal situations in which no special attention is paid to expressions". Speakers tend to talk more freely and naturally being in an emotional state, talking to intimate friends or not feeling observed. The less monitoring of speech is involved, the more colloquial a speaker will talk and vice-versa. Although casual speech is often equated and used synonymously with fast speech, it must be pointed out that they are not necessarily the same since a person can maintain a formal style in fast speech or talk casually in slow speech.

Depending on the style of speech, the processes mentioned above apply to different degrees. In casual speech several phonological processes can be found that are often (or sometimes even completely) absent in more formal styles of speech. Their application can also be expanded to a wider context or they can develop from being optional in one style while being obligatory in another. It is crucial to note that some processes have phonological reasons while others are purely phonetic in nature. This is shown by the behaviour of vowels in casual Dutch speech, as described in Ernestus' (2000) dissertation. .

The non-realisation of unstressed vowels is characteristic for casual speech styles of the Germanic languages. This can be observed in the case of vowels that are absent adjacent to continuants (like in gegevens/xə'xevəns/[xevəs]facts or vorige/'vɔrɪxə/['vɔrxə]previous).

Hiatus resolution
In other cases, when the process affects special domains, it shows that phonology is concerned. This can be seen in hiatus position within the same prosodic word, especially occuring in grammatical function words. There, /ɪ/ and /ə/ are deleted, like in sta ik/sta ɪk/['stak]stand I. Prevocalic schwa deletion, a process in which schwa gets deleted if it is adjacent to a vowel, which is not allowed in other speech registers, applies to compounds and noun phrases beginning with the determiner de in casual speech (see examples 1a, b, c). It does not apply to schwa-final prefixes, as shown in 1d and 1e.
Example 1

Another process of hiatus resolution entails the insertion of a glide sound [ʋ] or [j] between two homorganic segments. This process applies obligatorily within prosodic words and optionally in larger domains such as compounds and phrases. In 2a an example is given where a prosodic word is concerned or in 2b where the process applies at the level of the phonological phrase.

Assimilation is one of the processes that is well attested in Dutch casual speech. Examples of regressive (or anticipatory) assimilation, a process in which the pronunciation of a segment assimilates in place to the following adjacent segment, are found under 3.

Progressive (or perseverative) assimilation, a process in which a segment assimilates to the preceding adjacent segment, are also rather common. Examples of this type are shown in 4. The change of /d/ into its voiceless counterpart /d/, as observed in 4aand 4b, is found after obstruents if a phonological word is preceding.

Processes do not apply across all domains. While fricative voicing assimilation can be found in diminutive forms like 6a where the diminutive suffix -je assimilates to the preceding noun, the process is absent in 6b where the personal pronoun je forms a prosodic boundary to the preceding verbform kieschoose.

Degemination, a reduction phenomenon that can entail unfaithfulness to both underlying voice as well as duration (the phonetic transcriptions given below exhibit one out of several possible outputs each). While being obligatory in the smaller domain, like the compound in 8a, degemination is optional in larger domains. According to Ernestus' (2000) findings geminates show a correlation with speech rate: The higher the speech rate, the shorter the geminate.

The deletion of consonantal segments is much more common in casual, spontaneous speech than in formal speech or reading experiments (cf. Ernestus (2000: chapter 6)). A well-known process in Dutch is the so-called /n/-deletion at the end of a word. /t/-deletion is another phenomenon that is obligatorily found in diminutive nouns (9a, b, c) and before the suffixes -s and st, like in examples 9d and e which form a prosodic word.

/t/ does not delete if the preceding consonant is a sonorant as in tandjetand-je/tɑndjə/[tɑntjə][*tɑnjə]tooth-DIM or hemdjehemd-je/hɛmdjə/[hɛmtjə][*hɛmjə]. Optional /t/-deletion occurs in compounds such as in 10a, b and c, with higher scores in more frequent words like postkantoorpost office.

As Goeman (1999) has shown, across phrasal boundaries the process takes place more often postlexically and is more frequent before a consonant than before a vowel and least frequent before a break. As the following examples show it is the place of articulation of the second consonant that determines if /t/-deletion will apply. A following plosive triggers reduction more often than a nasal, being less likely before liquids and glides. Thus, while deletion is possible in 11a and 11b, in the latter two examples (11c and 11d) the process will occur less likely.

Looking at the sentences that were recorded for the Goeman-Taeldeman-Van Reenen-Project (GTRP) one also finds numerous of the above mentioned processes.

12a and b exhibit several of the processes discussed above, ranging from deletion, different kinds of assimilation, degemination, and epenthesis. Looking at the different variants, once again, shows that there is high interspeaker variation, i.e. language variation between different speakers.

[+] Theoretical accounts of the interface relationship

As described above, phonological processes apply gradually in general. In phonological theory several domains have been acknowledged by means of which it is possible to show the strength or weakness of boundaries and the influence between morphosyntax and phonology. Whereas the processes often apply obligatory in smaller domains (such as the syllable, the foot, or the prosodic word) they may be optional in larger domains (such as compounds and phrases). According to Booij (1995: 145), this can be explained by the fact that words are tied more closely together in smaller than in larger domains. This finding is supported by Inkelas and Zec (2001: 539) who stress that the interferential morphosyntactic impact is attested for the phonological word and the phonological phrase, while in larger domains, such as the intonational phrase, other (e.g. semantic or even pragmatic) influences are assumed to play a role. What Selkirk (1984 410) formulated as "The rules look at syntax and build phonology" is described in the Phonology-Free-Syntax model by Pullum and Zwicky (1988). In this model it is generally assumed that the interface between morpho-syntax and phonology is unidirectional meaning that syntactic information has an impact on phonology while the reverse is not attested. Contrary to that, Inkelas and Zec (1990) proposed a bidirectional model, in which phonology also constrains syntax.

Direct Syntax Approaches vs. Indirect Reference Theories
Since casual speech generally refers to running speech, phonological processes above the word domain, i.e. at the sentence level must be considered. While the Direct Access Theory ( Kaisse 1985) claims a direct effect of morpho-syntactic structure on sentence phonology and thus a purely phonetic motivation of processes independently of the internal prosodic structure, the majority of researchers however holds that a mediation between the syntactic and the phonological layer takes place. The Indirect Reference Theories (cf. amongst others Selkirk 1986; Nespor and Vogel 1986; Hayes 1989) claim that phonological processes are mediated through an additional autosegmental level and thus that the processes require prosodic structural information.

Like musical passages, utterances are phrased, too. (Hayes 1989: 201). The main idea of the Indirect Reference Theories is that this phrasing forms a prosodic hierarchy that is determined by, but need not be isomorphic with the morpho-syntactic structure. 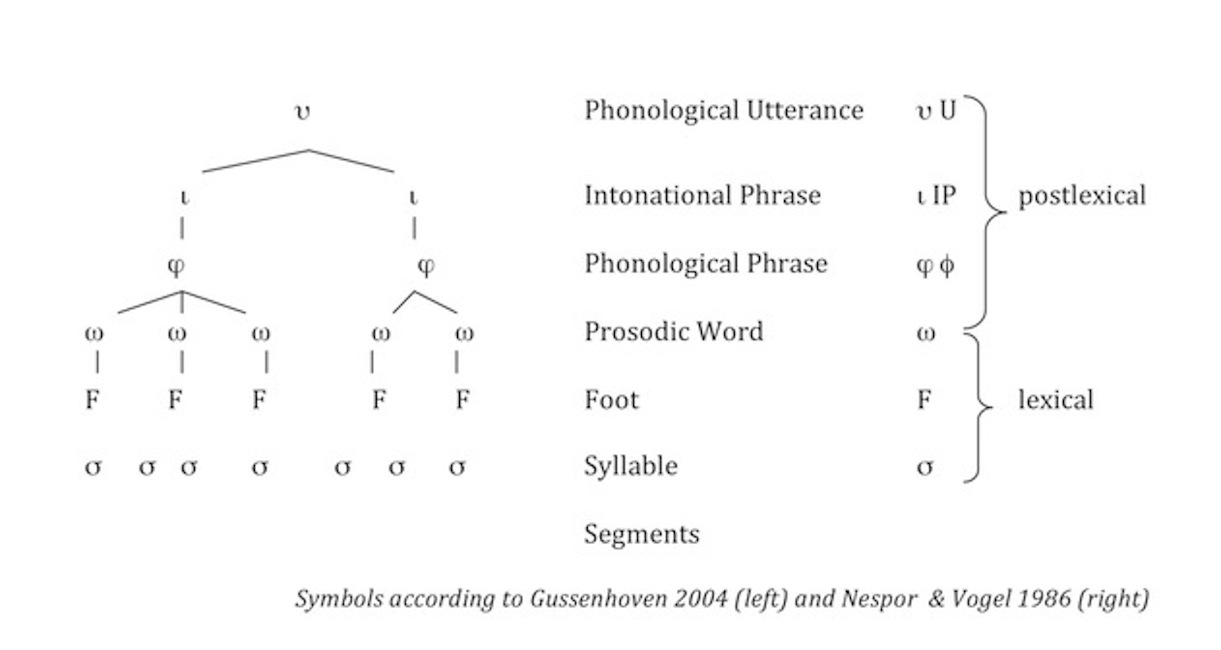 [click image to enlarge]
The phonological phrase (PP) is, according to Roca & Inkelas’ (1999) definition, the smallest phrasal domain that is definable in syntactic terms. It consists of a lexical head (i.e. a noun, a verb or an adjective), all the words on the non-recursive side of the head, and optionally a single-word constituent on the complement side. In syntactic terms this refers to a noun phrase, verb phrase or an adjective phrase.

The intonational phrase (IP) is described as the domain where intonational melodies associate to segmental material. Evidence for this category is thus given by intonational boundary tones. As mentioned above, the intonational phrase can involve syntactic, phonological, and semantic factors. Booij (1995: 144) outlines the different views on the IP: While Nespor and Vogel (1986) assume the boundaries for the assignment of sentence accents to coincide with pauses, Ladd (1986) argues that several sentence accents can be found in a clause, leading to two IPs. Gussenhoven (1992) and Gussenhoven & Rietveld (1992) eventually assume that no identification of a single prosodic category with the domain of intonational contour assignment is possible (cf. (Booij 1995: 144).

Dialectic conflicts in language systems: Some theoretical accounts
That every language system and thus “every grammar is a set of conflicting forces” ( Kager 1999: 4) where production and perception form a dialectic conflict, provides the basis of several theories, such as for example Natural Theory (henceforth NT; Donegan and Stampe 1979 and Stampe 1979) and Optimality Theory (henceforth OT; Prince and Smolensky 1993). In NT a distinction is made between processes and rules.The former occur naturally and can operate freely in casual, informal speech like non-standard dialects, while the latter have to be learnt in formal speech as well as in standard language usage. In OT the differences are described in terms of a ranking of two contradicting constraints: While faithfulness constraints map the output to the underlying phonological information, leading to ease of perception of the hearer, markedness constraints put ease of articulation of the speaker central and are, according to Kager (1999: 5) “ultimately grounded in factors outside the grammar, i.e. in articulation and perception”. The more informal and more casual a style of speech, the more reduction of articulatory effort will be found since that means that ease of production is more important than ease of perception (markedness dominates faithfulness). That speakers weigh the factors production (speaker's ease of articulation) and perception (listener's intelligibility) according to the informational requirements, is described in Lindblom's (1990) H&H Theory, in which the two H's stand for 'hypoarticulated' and 'hyperarticulated' speech. In the former speakers minimize their articulatory trajectories, leading to a smaller vocalic space, lower fundamental frequency, lower numbers of breaks and overall syllables, deletions as the significant phone variation, shorter phone durations and a higher speech rate. Hypoarticulated speech is characterized by its generally low intelligibility at the side of the speaker. In hyperarticulated speech the reverse characteristics have been found to hold true, with insertions as significant phone variations and higher numbers of glottal stops as compared to neutral speech. Articulatory effort thus puts the listener's ease of perception central.
References:
Suggestions for further reading ▼
phonology
Show more ▼
morphology
Show more ▼
syntax
Show more ▼
⇑ Back to top
ABOUT THIS TOPIC
Author(s):
Anna Kirstein
Category:
Dutch Phonology
Publication date:
07 August 2019
Keywords:
prosody phonology syntax casual speech style register sociolinguistics intraspeaker variation interspeaker variation phonological process
cite
print
Jump to: