Consonants are generally described in terms of the following three parameters:

General reading: (Coetzee 1981)(De Villiers and Ponelis 1992)(Van Wyk 1977)(Le Roux and Pienaar 1927); (Kent 1992);(MacKAy 1987); (Rietveld 1997)
readmore
[+]Places of articulation for Afrikaans consonants
Bilabial
Bilabial speech sounds are produced with a constriction formed by both lips. See the human speech organs. Acoustically, bilabial obstruents are characterised by noise or noise bursts with a relatively flat spectrum (diffuse energy), and by formant transitions from and to adjacent vowels (all formants are usually lowered in the vicinity of a bilabial). Bilabial nasals show the presence of low frequency (~1000 Hz) anti-formants, or spectral valleys.

Labiodental
Labiodental speech sounds are produced with a constriction between the upper teeth and the lower lip. See the human speech organs. Acoustically, labiodental fricatives exhibit noise characterised by a relatively flat distribution of energy across the spectrum (no obvious prominence peaks).

The Afrikaans labiodental consonants are /f/ and /v/; /ʋ/ is an allophone of /v/in onset clusters, with plosives or /s/ as first member, e.g. in sweet/svet/[sʋet]sweat.

Alveolar
Alveolar speech sounds are produced near the alveolar ridge, behind the upper teeth. See the human speech organs. Acoustically, alveolar obstruents are characterised by noise or noise bursts with a centre of gravity (COG) upward of 4000 Hz. Afrikaans /s/exhibits notably higher COG values for alveolar obstruents than Dutch . Alveolar nasals have a spectral peak around 500Hz and a spectral valley around 1kHz.

The Afrikaans palato-alveolar consonants are /ʃ/, /ʑ/, both loan phonemes/ʃ/ is also frequently found as a product of coarticulation with preceding /r/, as in the word bars/bɑrs//bɑrʃ/burst.

Palatal
Palatal speech sounds are produced with a constriction involving the tongue body and the hard palate. See the human speech organs. Acoustically, palatal sonorants have a formant structure characterised by a relatively high F2.

The Afrikaans palatal consonant is [j].

Velar
Velar speech sounds are produced at the velum (soft palate). See VERWYSING: xref the human speech organs. Velar obstruents are characterised by noise or noise bursts with a relatively low centre of gravity (typically around 4200Hz), an acute noise peak at a low frequency (below 2 KHz) and one or more additional ones. Spectrograms show an identifiable formant structure, as opposed to fricatives and stops at other places of articulation; F2 is the most clearly visible formant. Velar sonorants have a formant structure characterised by a relatively low F2 and low F3, to the point where the two approach each other.

The Afrikaans velar consonants are /k/, /x/, /ŋ/; /ɣ/is an allophone of /x/ in cases where regressive voicing asimilation occurs, as in the word oogbank/ox.bɑnk/[uəɣ.bɑŋk]

Uvular
Uvular speech sounds are produced at the very back of the velum, close to or at the uvula. They may include vibration of the uvula (in trills and fricatives). See the human speech organs. Acoustically, uvular obstruents are characterised by noise with a low centre of gravity (around 4200 Hz) and a formant-like structure. Spectral peaks are around 1500 Hz, and a spectral valley generally occurs around 2500. Uvular sonorants have a formant structure characterised by a lower F2 than velars, and a relatively high F3.

The uvular trill [R] functions as an allophone of /r/ in some individuals; more frequently so in the southern parts of South Africa, especially in the Western Cape.

Glottal
Glottal speech sounds are produced in the larynx, by approximation of the vocal folds.

The Afrikaans glottal consonant is /h/.

[+]Manner of articulation for Afrikaans consonants
Plosives
Plosives are consonants involving a complete closure of the articulators, along with a raised velum, followed by a rapid release of built-up pressure behind the closure. Acoustically, they exhibit a silent phase, followed by a brief noise burst.

Fricatives
Fricatives are consonants involving the creation of turbulent airflow through a narrow channel produced by the close approximation of the active and passive articulators. See the human speech organs. Acoustically, they exhibit aperiodic energy (noise).

The Afrikaans true fricatives are /f/, /s/,/x/, /v/, /j/. /j/ is generally typified as a fricative in the case of Afrikaans; sometimes as an approximant too. SEE above for the special status of /ʑ/ and /ʃ/ as loan phonemes, and [ɣ]as allophone of /x/.

Nasals
Nasals are speech sounds produced with a simultaneous oral closure and a lowered velum, allowing air to escape through the nose. See the human speech organs. Acoustically, they are sonorant consonants, exhibiting low-amplitude, vowel-like periodicity. They are typically characterised on a spectrogram by the presence of antiformants (spectral valleys).

The Afrikaans nasal phonemes are /m/, /n/, /ŋ/; [ɲ] shows up as allophone of /n/ in especially diminutive nouns, ending on /nt/, as in katjie/kɑɲ.ci/kitten.

Approximants
Approximants are consonants involving the free flow of air through a channel wide enough to preclude turbulent noise. Acoustically, they are characterised by the presence of formant structure. 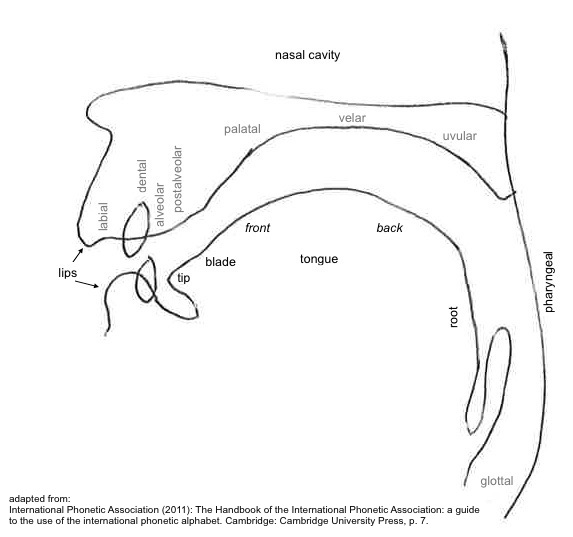 The Afrikaans voiceless consonants are /p/, /t/, /k/, /f/, /s/,, /x/; /ʃ/being the only loan consonant. Voiceless plosives lack aspiration, but may show some presence of affrication. The voiced plosives /b/ and /d/are basically characterised by the presence of prevoicing, although prevoicing frequently is absent..