Palatalisation of velar (or further back) consonants /k/, /x/ and the glottal /ɦ/ in onset position to allophonic [j], /c/, /ç/ when followed by a high vowel (especially the high front [i] vowel), occurs readily in Afrikaans. Furthermore, the alveolar /s/ in coda position tends to change to the allophone [ʃ] under the influence of [j]. One of the foci here is on a fairly recent development, in which /s/ under the influence of preceding /r/ tends to change into the palatal [ʃ] too.

[+]A. Palatalisation as a result of regressive coarticulation

In the following figures, the pronunciation of the three velar consonants without and with palatalisation is demonstrated. Listen to these words when palatalised: 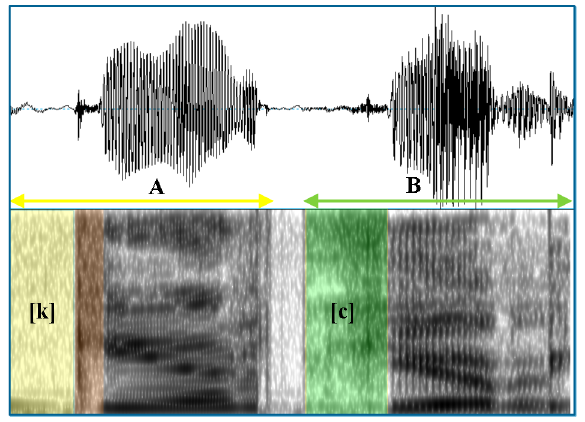 Figure 2: Palatalisation of the voiceless velar consonant /x/ in geen /xen/. A: [xiən]; B: [çiən] 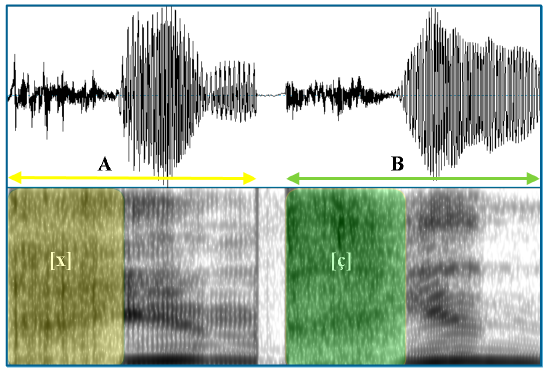 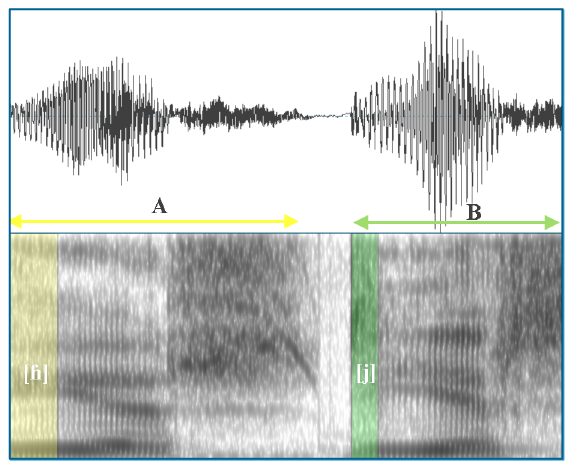 [click image to enlarge]
[+]B. Palatalisation as a result of progressive coarticulation

A notable sound change regarding the voiceless fricative /s/, when following the rhotic consonant /r/, was first reported by Wissing et al. (2015). This alveolar fricative is frequently palatalised, especially in the language usage of young millenials at the beginning of the 21st century. The product of this phonological process is the palatalallophone [ʃ], to be observed in the following structures:

In Figure 4, in the word verseker, an unpalatalised [s] is compared to a palatalised /ʃ/.

Listen to the sound: 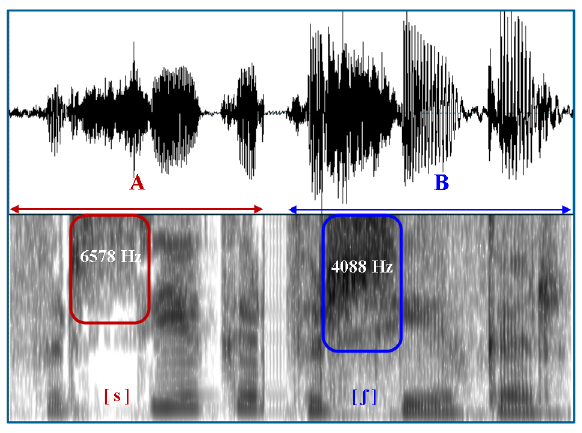 A was recorded 15 years prior to B. As can be seen, in A a much higher Centre of Gravity is present i.e. 6,578 Hz vs. 4,088 Hz for B. The study by Wissing et al. (2015) revealed that in especially the pronunciation of young, white Afrikaans speakers /s/ is often subject to progressive palatalisation when preceded by /r/ in the coda cluster /rs/, and, to a lesser extent, in other contexts where /r/ is involved, for example across syllable and word boundaries. Only a slight presence of palatalisation was detected in the production of older white speakers. This finding might be indicative of a definite change in the Afrikaans fricative system.