The finite interrogative object clause mainly occurs in clause-final position, after the matrix clause, as in example (1). It can, like its declarative counterpart, also be found in the clause-initial position, as in example (2), which is attested in very low frequencies in the Taalkommissiekorpus. It is not clear if the matrix clause can be embedded as fragment within the complement clause, as in example (3a) and (3bi), since such instances are unattested in the samples of the corpora available for analysis. The exception is (3bii), which is attested in extremely low frequencies in the data, where main clause rather than subordinate clause word order is used, and where the “matrix clause” functions as an adverbial rather than a main clause. 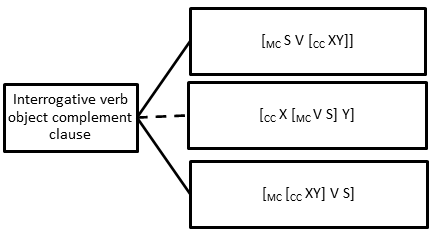 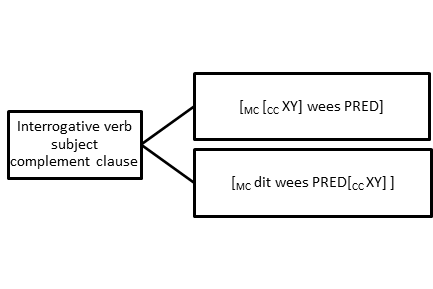 Finite interrogative complement clauses can also be used as the predicate in a copular construction, mainly after the verb isbe.PRSis or lykappear, with limited syntactic variation, as in example (6). 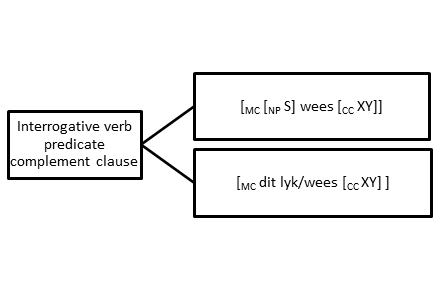 The overall frequency of interrogative complement clauses in the three major syntactic functions are summarised in Figure 4, based on an analysis of the Taalkommissiekorpus. 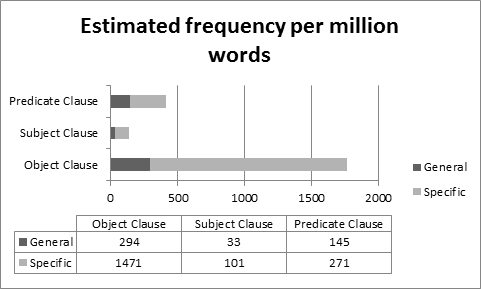 Interrogative object clauses, like their declarative counterparts, can occur after (clause-finally) or before the matrix clause (clause-initially), as is illustrated by the examples in (1) and (2). The matrix clause can also be inserted parenthetically in the object clause, as in (3bii), but it is not possible in Afrikaans to do so with complement clauses that have subordinate word order – only independent clause interrogative order can be used, which clearly demonstrates that this syntactic pattern does not involve a main clause-subordinate clause relationship. Rather, the complement-taking predicate functions as a genuine parenthetical insertion, and not as a matrix clause for the subordinate clause. Further examples similar to (3bii) are given in (7). Note the repetition of the complete interrogative with independent word order in (7b).

Differences in syntactic distribution are therefore not very productive for the interrogative object clause construction. The few attested cases of the clause-initial variant are mostly from the fiction and newspaper registers (as is the case with the declarative clause counterpart) and can be seen as an extension of an option that is more productive for the declarative complement clause construction, and not very salient or entrenched for the interrogative complement clause. Example (8) and (9) from these registers illustrate the use of the clause-initial variant.

The most salient characteristic of the matrix clause that distinguishes between the use of the declarative and interrogative subject clause is the presence of negation. Negation is expressed either by means of a syntactic negation construction, as in example (10), a negative prefix attached to the adjective predicate of the clause, as in example (11), or by selecting a predicate that has the meaning of doubt or some other negative prosody, as in example (12).

General interrogative subject clauses are infrequent in Afrikaans. Both the extraposition and clause-initial variants are available and attested in the data, as illustrated by (4a) and (5a). While the extraposition variant is attested slightly more frequently in the data, the difference is much smaller than for any other subject clause constructions (declarative, specific interrogative or infinitive). The data do not yield any clear evidence of syntactic differences between the two variants. Thus, matrix clauses are generally not syntactically more complex in the case of the clause-initial variant, as might be motivated by considerations of end-weight or processability. In fact, the vast majority of matrix clauses in the data for both variants are short and syntactically very simple. The most typical pattern is a copular construction with the copular verb isbe.PRSis and an adjective that is either negated by nienot or contains a negative prefix, usually [on-], as is illustrated by examples (13) and (14).

Alternatively, other verbs are used, but drawn from a fairly limited pool of options of a relatively fixed idiomatic nature, as is illustrated by afhangdown-hangdepend on in (15) and saakmaakconcern-makematter in (16). The section on lexical associations provides more detail about these verbs.

What is particularly interesting about these verbs, as supporting evidence for their status as fixed expressions, is the extent to which they display reduction, by omitting the anticipatory pronoun ditit, and in the case of example (17) below, even the copular verb. Examples of such omission are the following:

This feature occurs in standard written Afrikaans, although often in fictional dialogue, where the writing pretends to simulate speech or the inner monologue of characters. This is the case even though the general interrogative subject clause construction itself is even rarer in spoken than written Afrikaans.

The specific interrogative subject clause construction is considerably more frequent in Afrikaans than the general interrogative, and also has a wider range of meanings: epistemic, evaluative and importance, as is shown in the section on lexical associations.  Syntactically, however, the constructions are quite similar, except that the association with negation is much stronger with epistemic meanings, and not so prominent with the other meanings of the construction. For all three types of meanings, the more frequent syntactic construction is the extraposition construction, as exemplified in (4b), while the clause-initial variant, exemplified in (5b) is considerably less frequent.

The extraposition construction mainly has a copular verb and an adjective as predicate, whether this adjective is negated or not. The verb isis is by far the dominant copular verb, with a very small number of other verbs, including wordbecome, blykappear and blyremain also attested. Examples of this pattern are the following:

The omission of the dummy subject and copular verb of the matrix clause is also attested, with only the predicate remaining, still introducing the specific interrogative subject clause. This option is mainly attested with evaluative meanings, as is shown by the following examples:

A much smaller number of cases show the use of another verb in the matrix clause. Similar to the general interrogative subject clause construction, these verbs usually come in the form of relatively fixed phrases. The most prominent of these expressions is dit maak nie saak … nieit doesn't matter, while expressions like kleinkrysmall-getgrasp, dit skiet X te binneit shoots X to insideit strikes X and traakbother are also found. In the case of dit maak nie saak … nie, the omission of the dummy pronoun ditit is widespread. These options are illustrated by the following examples:

Interrogative predicate clauses, like interrogative subject clauses, have not been investigated previously in Afrikaans. Our investigation of the Taalkommissiekorpus shows that there are a small number of very dominant patterns, with limited deviation from these patterns. It emerges very clearly from the data that predicate clauses with the general and specific interrogatives are used in very different ways in Afrikaans. General interrogatives are used to suggest uncertainty about the validity of the proposition in the predicate clause. Thus, the most frequent pattern in the data is with the dummy pronoun ditit as subject and the copular verb lykseem as main verb, as in example (33). The past tense form het gelykhave seemedseemed is also attested reasonably often, although not nearly as frequently as the present tense form, as in example (34).

The verbs voelfeel and voorkomappear are also found in the data with more than negligible frequencies, also in combination with the dummy pronoun ditit, as illustrated by example (35) and (36). In the case of voorkom, the dominant pattern is the collocation with the modal wilwill.

The pattern extends to the copular verb isbe.PRS, which occurs with similar frequency to voel and voorkom in combination with the dummy pronoun dit, and where the meaning is usually quite similar to lyk or voel, thus not clearly assertive, as illustrated by example (37). The contraction of the pronoun dit and the verb is to disit.isit's is quite prominent in the data.

The other major pattern for general interrogatives is a matrix clause with die vraagthe question as subject and the copular verb is as main verb, as in example (38), where the meaning of the matrix clause is to assert the actuality of the question being posed.

In this case, as with the corresponding matrix clause pattern associated with specific interrogatives, the noun vraag introduces a new twist in the argument, where a particular question is raised as a consequence of the preceding arguments. It serves a cohesive function at textual level, bridging the discussion preceding and following the interrogative complement clause construction use.

As far as specific interrogatives are concerned, there are only two frequent subjects that are used in this construction: the pronoun dit, illustrated by example (39) and (40), and a noun phrase with head noun vraag, illustrated by (41).

The pronoun dit functions not as dummy pronoun, as it does in the case of subject or general interrogative predicate clause constructions, but as anaphor, usually referring back to information in the immediately preceding discourse. Thus, in example (39), the preceding sentence refers to the place where Mark Shuttleworth was trained for his trip into outer space, which is then followed by a further piece of information in the example sentence itself. Likewise, in the case of example (40), taken from a direct quotation in a magazine interview, the pronoun refers back to two statements in the preceding sentences: Ek het nie een van hulle beantwoord nie. Vermy tot elke prys konfrontasie.I did not answer anyone of them. Avoid confrontation at all cost..

The subject noun phrase Die vraagThe question in example (41) does not represent pronominal anaphora, but is still a word that ties the proposition in the predicate clause to the surrounding textual context, by drawing attention that all the information presented up to that point raises a question. The predicate clause then explicitly states that question, which serves as transition to the subsequent discussion of that question.

All other subject noun phrases together account for less than 10% of all the data in the sample from the TK, and not a single subject noun phrase amounts to 1% of the data. A number of these low frequency variants are illustrated by the examples in (42), and in general, they function in similar ways to the more prototypical subject noun vraagquestion.

The verb of the matrix clause in specific interrogative clauses is almost invariantly the verb weesbe (more than 96% of the time in the data set analysed), and specifically the present tense form isis.