The following table gives examples for each single codaconsonant following each of the native Dutch vowels (examples taken from Theissen et al. 1988 and Cohen 1972). A few interesting observations can be made right away:

In the following sections we will focus on most of these observations in more detail and try to give explanations for the phenomena.
Table 1
readmore
[+]A-class vowel / diphthong + /v, z, ɣ/ and B-class vowel + /f, s, x/

There are a few exceptions to this observation. In the two loanwords puzzel /pʏzəl/ puzzle and mazzel /mɑzəl/ luck a B-class vowel is followed by a voiced fricative. However, an alternative pronunciation of the first item as [ˈpy.zəl] indicates a speaker preference for a sequence of A-class vowel plus voiced fricative.

A third group of exceptions related to this observation concerns diphthongs. Whereas A-class vowels and diphthongs usually pattern together phonologically, diphthongs seem to be less compliant with respect to this particular co-occurrence restriction. As can be seen in table (1), all three diphthongs can not only be followed by voiced fricatives but also by /s/ and the diphthong /œy/ can also be followed by the voiceless velar fricative /x/ (although all those examples are scarce). Evidence for underlying voiceless fricatives comes from derived plural or past tense forms: krijs - krijste [ˈkrɛistə] screamed, kruis - kruiste [ˈkrœystə] crossed, kous - kousen and gejuich - juichen - juichte [ˈjœyxtə] cheered. The noun kous [kɑus] stocking does not show the voiced fricative in the plural form kousen [ˈkɑusə(n)] (in contrast to e.g. saus /sɑuz/ [sɑus] sauce - sauzen /sɑuzə(n)/ [ˈsɑuzə(n)] sauces). Furthermore, all the verb forms mentioned select the past tense suffix -te [-tə] (instead of -de [-də]) which is typical for voiceless obstruent final verb stems (cf. afstoffen /ɑfstɔfə(n)/ to dust - stofte af /stɔftə ɑf/ [ˈstɔftə ɑf] dusted but kleven /klevə(n)/ to stick to - kleefde /klevdə/ [ˈklevdə] sticked to).

The phonological accounts for this vowel + consonant co-occurrence restriction are very limited. Van Oostendorp's (2003,2007) account rests upon the `Multiple Feature Hypothesis' (cf. Kager et al. 2007, Iverson and Salmons 1995; Avery and Idsardi 2001), i.e. that the voicing contrast only holds for Dutch stops. Van Oostendorp proposes that the contrast in Dutch fricatives is not a laryngeal contrast but a length contrast since there is phonetic evidence that phonetically voiced fricatives are considerably shorter in duration than phonetically voiceless ones. Furthermore, it is assumed that long/voiceless fricatives project one mora, while short/voiced fricatives are not moraic. In the case of vowels, it is additionally assumed that A-class vowels project two moras and B-class vowels project one mora. Combined with the presupposition that stressed syllables must minimally and maximally consist of two moras, the observed cases as depicted in (i) knuf(fel) /knʏfəl/ hug and (ii) heuv(el) /høvəl/ hill are allowed whereas the cases in (iii) huv(el) /hʏv/ and (iv) kneuf(fel) /knøf/ are prohibited because the resulting structures are either too small or too big, respectively (cf. Van Oostendorp 2007:88).

The two Dutch glides /j, ʋ/ can only occur after A-class vowels; they are usually prohibited after B-class vowels and diphthongs. /j/ can only be found after back vowels ( /uj, oj, aj/), whereas /ʋ/ occurs exclusively after front vowels ( /iʋ, yʋ, eʋ/). Examples are given in (3). The front vowel /ø/ is never followed by a glide. These vowel + glide sequences are also called pseudo diphthongs or 'fake' diphthongs.

Exceptional cases of the sequence B-class vowel + glide do occur in a small number of loanwords (4) and in the word hoi /hɔj/ hello (examples taken from Booij 1995:44).

As a consequence of the fact that A-class vowels can be followed by maximally one consonant in the same rhyme, glides following A-class vowels cannot be followed by other consonants in the same coda. Coronals seem to be exceptional - cf. the two examples ooit /ojt/ sometime or stoeis /stujs/ frisky. However, it has been claimed that word-final coronals do not belong to the coda but instead occupy an appendix position (e.g. Moulton 1956) since they are the only consonants that can occur in (phonological) word-final extra-long consonant clusters.

In the previous paragraph we saw that diphthongs should be analysed as complex nuclei in Dutch, patterning with A-class vowels in that they allow for maximally one additional (non-coronal) coda consonant. However, additional restrictions apply to the quality of the consonants following diphthongs.

The two tables below list examples for all attested combinations of the three diphthongs and obstruent coda consonants (see 2) as well as diphthong and sonorant coda consonants (see 3). The examples marked with ** either refer to the only attested example (based on CELEX and Theissen et al. 1988) or to a very small set of examples. Since final devoicing is active in Dutch, related/derived forms are given to provide evidence for the proposed underlying forms.

A striking observation is the fact that the three (real) diphthongs in Dutch ( /ɛi, œy, ɑu/) can neither be followed by the rhotic consonant nor by any of the two glides /j, ʋ/(Booij 1995:34).

As for /r/, this means that (word-final) structures such as /ɛir, œyr, ɑur/ are not found. By contrast, if the diphthong and the rhotic consonant belong to separate syllables, diphthongs and /r/ can indeed co-occur, as exemplified by the (loan)words in (5).

Booij (1995:34, citingKoopmans-van Beinum 1969) states that homosyllabic diphthong + rhotic consonant sequences usually get resolved by schwa-epenthesis, which is the result of conflicting articulatory gestures: all Dutch diphthongs are rising diphthongs involving a rising tongue movement towards high vowel positions, which is opposed to the centralizing gesture that is necessary for the pronunciation of the rhotic consonant.

Secondly, in contrast to A-class vowels, diphthongs cannot be followed by glides. Instead of stating a constraint prohibiting any homosyllabic diphthong + glide sequence, one might propose a moraic explanation for this phenomenon. Following standard Moraic Theory (McCawley 1968;Hyman 1985;McCarthy and Prince 1986;Zec 1988,1995;Hayes 1989;Morén 1999), syllable onsets do not contribute to syllable weight, whereas nucleus and coda positions do. According to a non-length based approach distinguishing A-class vowels and B-class vowels, it is reasonable to assume that both vowel types are monomoraic (notice the difference to the proposal in the extra box above). In contrast, diphthongs, being complex nuclei, are assumed to be bimoraic structures. All coda consonants project a mora in Dutch (see extra above for a possible exception).

According to the Sonority Sequencing Principle(Clements 1990), the sonority should steeply rise for onset + nucleus sequences and mildly decrease or not decrease at all in rhymes, i.e. nucleus + coda consonants. As a consequence of the sonority hierarchy given below, obstruents ideally occur in onset positions and sonorants in coda positions.

Since glides are the most sonorous non-vowel segments, they prefer to occur in coda positions, consequently projecting a mora. It has been postulated that a bimoraic maximum restriction holds for Dutch syllables (Van Oostendorp 2004). Hence, A-class vowels can be followed by a glide within the same syllable. However, diphthongs already occupy the two available moras and therefore do not leave space for a mora-projecting glide within the same syllable.

There are two questions that immediately arise: first, why can monomoraic B-class vowels apparently not be followed by glides and, second, why can bimoraic diphthongs be followed by consonants other than glides? The first problem seems to be a mere gap, probably due to diachronic language developments, since loanwords that exhibit a B-class vowel + glide sequence are easily integrated into Dutch without changing the vowel (cf. 4). The problem addressed in the second question seems more structural in nature and might again be an effect of the Sonority Sequencing Principle (see above). Whereas highly sonorous glides have a strong preference for coda positions but are dispreferred in following diphthongs within the same syllable due to the bimoraic maximum for Dutch syllables, obstruents following diphthongs can happily be assigned to the onset of a following degenerate syllable, i.e. a syllable with an empty nucleus. Notice that this account adopts a slightly different notion of syllable structure than described in phonotactics at the syllable level. The suggested syllable structure is illustrated in the following figure for the example wijk /ʋɛik/ neighbourhood. Notice that the word does begin with a glide in onset position. This is possible since the glide is attached to a strong position - word-initial position and part of an onset that is licensed by the following non-empty nucleus. 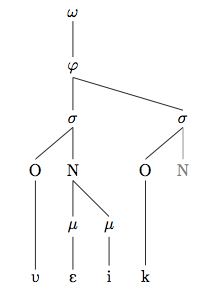 Additional support for such a proposal comes from words containing intervocalic glides. Compare the two words bouw [bɑu] construction (industry) and bouwen [ˈbɑu.ʋə(n)] to build. Whereas in the former word the word-final glide does not surface after the diphthong (it is not licensed in the onset of an empty-headed syllable and therefore unpronounced/deleted), the glide in intervocalic position does surface since its onset position is licensed by the following nucleus containing schwa.

Although this account might appear stipulative at first sight, it makes correct predictions when considering segments of decreasing sonority. Analogously to glides, rhotic consonants are not allowed after diphthongs. So, the claim would be that rhotic consonants cannot occur in onsets of empty-headed syllables either (cf. examples in 5; but raar [rar] weird). In contrast, the less sonorous class of laterals as well as all other even less sonorous consonants are allowed in onsets of empty-headed syllables and therefore can follow diphthongs (cf. zijl /zɛil/ rope, uil /œyl/ owl, Paul /pɑul/ name).

Trommelen (1984) provides an overview of traditional accounts concerning the velar nasal restriction. One approach considers the velar nasal [ŋ] as a phonological cluster consisting of a (velar) nasal and a velar obstruent /ŋg/(see Moulton 1962:303;Leys 1970). From the examples (a-c) in table (4) below one could assume that the velar nasal behaves as a single consonant and patterns with the other nasals. However, the examples in table (4d-g) illustrate that this is not the case. Instead it seems that the velar nasal behaves similarly to consonant clusters (see 4h-k) (all examples are taken from Trommelen 1984:158). So, proponents of the cluster approach argue that the `velar nasal cluster' patterns with other homorganic consonant clusters, as shown in table (5). Leys (1970) adds supporting evidence with the alternations koning [ˈkonɪŋ] king vs. koninklijk [ˈkonɪŋklək] king-like and oorsprong [ˈorsprɔŋ] origin vs. oorspronkelijk [orˈsprɔŋkələk] original.

Alternatively, Trommelen (1984), Cohen (1961) and Robinson (1972) argue for a single underlying consonant. First, the second member of a /ng/ŋg/ cluster is not a native segment of Dutch. Further convincing evidence comes from minimal pairs and the selection of the diminutive suffix (see table 6), in which the velar nasal behaves like a single consonant.

So far we have established that the velar nasal is a single consonant that is restricted to coda positions within a syllable. Lastly, we need to explain why the velar nasal can follow a B-class vowel but cannot follow either A-class vowels or diphthongs. Applying a non-length-based approach to distinguishing Dutch vowels, one is confronted with the problem that monomoraic B-class vowels pattern differently from monomoraic A-class vowels and bimoraic diphthongs. So, a solution to this problem cannot be found in a minimum/maximum restriction on rhymes. Instead we refer to Van Oostendorp (1995;2000) and the syllable theory presented there. The crucial idea is that vowels specified by the feature [lax], i.e. B-class vowels, enforce a branching rhyme structure (see also rhymes), whereas vowels lacking this feature do not. Applied to the velar nasal restriction problem at hand, this gives the desired result. All B-class vowels call for a coda position which can be filled by the velar nasal. Following a non-lax vowel, i.e. an A-class vowel or diphthong, the velar nasal would be assigned to the onset position of a following degenerate syllable, which is impossible. The following representations illustrate the described scenario.