Short /ɔ/ occurs freely, and stressed as well, in all positions other than open syllables, word-finally, as in offer /'ɔ.fər/do. , wonder /'vɔn.dər/do. and karton /kɑr.'tɔn/cardboard.. In fact, /ɔ/ is found in only a small number of polysyllabic monomorphemes in word-final, open syllables, most of them place and persons' names adopted from indigenous South African languages, for example in Limpopo place name and Renamo (one of several possible pronunciations of this name).

In all instances of short vowels, the following topics should be taken into account as important background information:

In the following Extra, polysyllabic monomorphemes with /ɔ/ as the nucleus in closed final syllable position are listed, with indications of stress patterns. Examples of words with /ɔ/, with /n/ as coda, are taken as representative of the sononant consonants /m, n, r, l, ŋ/ in coda position. Cases with obstruent codas are very limited and mainly restricted to /s/ and /t/. Rare examples are kompos, kosmos, Rhodos - all with penultimate stress -, and boikot, Hotnot - also with penultimate stress. The unfamiliar word skavot has word-final stress.

It is significant that, despite the fact that /ɔ/ is classified as phonemically short, with regard to stress behaviour it behaves similarly to long vowels in the same contexts. As such, stress patterns cannot function as classifying criteria for whether vowels are phonemically short or long.

In the Extra below, bisyllabic and multisyllabic monomorphemes with /ɔ/ as nucleus and with /n/ as coda, in closed final syllable position, are listed. 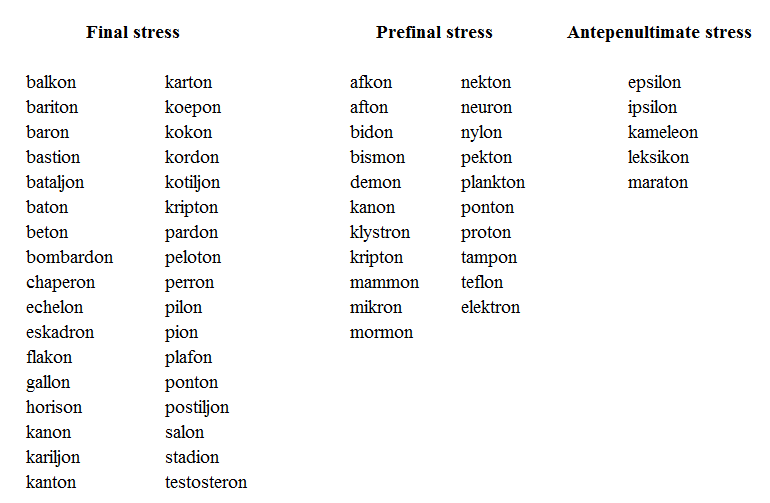