This section provides a general overview of the coda in Afrikaans. Wissing (1982) gives a brief overview of the Afrikaans phonotactics in a generative framework, and Lubbe (1986) provides more information within a metrical framework The following is largely based on his description.

In this topic we handle the possible restrictions on combinations of nuclei and codas.

Generally codas are part of the rhyme constituent of a syllable and follow the nucleus, as is clear in the following basic figure (Figure 1). In the following sections the essence of the Afrikaans coda, made up by C, CC and CCC, will be presented. 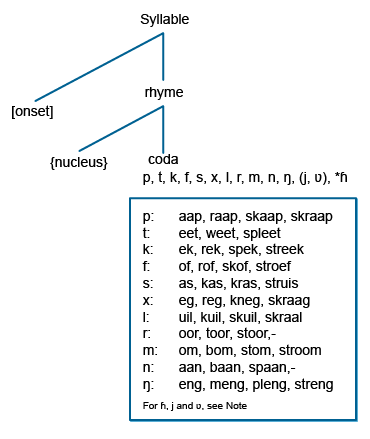 The precise character of the exemplified vowels in Figure 1 is not important, and neither is a translation of the words. Transcriptions and translations are not therefore provided.

Note that constituents in brackets are optional in Afrikaans. Structures in curly brackets (viz. onset and nucleus) are given with the purpose of perspective only. For details on the onset and the nucleus, compare The Onset and The Nucleus.

Lubbe (1986) declares the following points of departure in his description of the Afrikaans coda:

All consonants bar /ɦ/, and to an extent /j/ and /ʋ/, are permitted as singleton consonants (C) in Afrikaans coda position. Figure 1 of the word-/syllable-final C-consonants, as an element of the Afrikaans rhyme, provides examples of monomorphemic words with all possible coda configurations, viz. No-C, C, CC and CCC. Onset and nuclues are in curled brackets, indicating that they are not in the focus of attention here. See the topics on onset and nuclues elsewhere.

Should the untrue diphthongs be transcribed as for instance /aj/, /oj/ and /j/ and /ʋ/ may also function as single codas, leaving /ɦ/ as the only impermissable consonant. Confinement to surface structures excludes all voiced nonsonorant consonants in syllable-final position, which explains the absence of [b], [d], [g], [v], [z] in Figure 1 above.
[+]CC-codas

In accordance with the Sonority Hierarchy CC-codas typically are formed by a combination of sonorant consonants, that is nasals, the lateral and the trill in C1-position, with nonsonorants in C2-position, that is the obstruents, viz. (voiceless) plosives and fricatives. In Afrikaans combinations of two obstruents as coda are impermissable: except for a small number of words like agt eight and takt tact.

Combinations of sonorants in codas do occur underlyingly, but are often decomposed on the surface by schwa-insertion. Thus C1C2 in walm, arm are pronounced as respectively [ləm], [rəm] and [rən].

Possible coda consonant clusters are, with the exception of a few cases, the mirrors of onset clusters (Booij 1981). The mirror onset images of the following do not occur: /-mp/, /-mt/, /-mf/, /-nt/ and /-rs/, well as all combinations with the velar nasal [ŋ], that is not permitted in onset position. The strategy of schwa insertion between sonorant consonants ensures that the inversely ordered thereof are per definition impossible onset clusters. The coda clusters with C2 as voiceless obstruents (e.g /-lp/ and /-rt/ validate their onset mirror images /pl-/, /tr-/ etc.

The situation would have been more complex should the phonotactics of C1C2-codas were applied to phonological representations, where word final obstruents are present (e.g. in /-nd/, /-ld/ and /-mb/). In Afrikaans the mirrors of these clusters are not permitted, thus /-nd/, /-ld/, /-mb/ and others).

Combinations of nasals and stops in coda clusters are restricted in that only nasal + homorganic stops are possible. Consequently /-nt/ is permissable; /-mt/ or /-ŋt/ is not, likewise with /-mp/ and [-np] or [-ŋp].

Unproductive coda clusters are the following:

Coda consonant clusters generally follow the Sonority Sequencing Principle. This is not the case with these three coda clusters. The coda clusters with C1 = [p] and C2 = [s] (thus /-ps/, /-ts/ and /-ks/) do pose a problem for the traditional coda consonant cluster account, and seemingly should be accepted as violations of the Sonority Sequencing Principle.

Lubbe (1986) suggests coda clusters as constituting one singleton consonant. If accepted, this could be a neat solution for this dilemma (see also (Lubbe 1987)).

Co-occurrence restriction of coda clusters with nuclei in rhyme structures will be dealt with in the topic Rhyme (see the figure below).

Figure 2: Restrictions of coda clusters with nuclei in rhyme structures 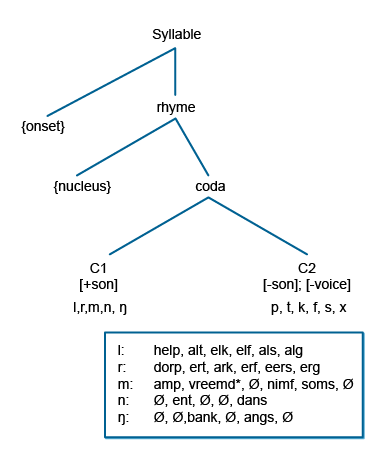 The coda clusters /-ps/, /-ts/ and /-ks/ are the only ones that go against the sonority hierarchy. Lubbe(1987) argued for taking the onset clusters /sp-,/, /st-/ and /ks-/ as singleton consonants. The same could be a possible solution for the analysis of the three coda clusters mentioned above. 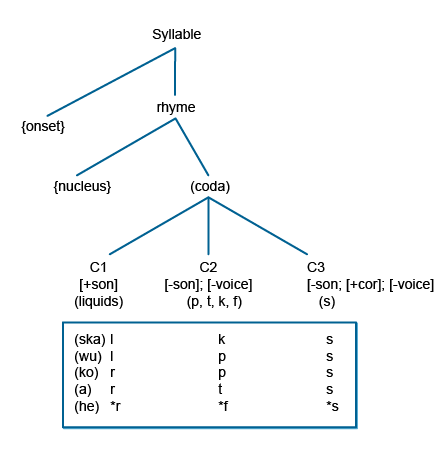 According to Lubbe /-rts/ is the only productive CCC-cluster in Afrikaans (e.g. arts, (suid-)waarts, hierts, flirts, toorts, voorts ). He mentions that [-ŋks] also occurs quite frequently, but surfaces as [-ŋs]; the same happens to /-nts/ > [-ns]. Other rarely used -CCC's are: /-lks/, /-lfs/, /-lps/, /-rps/ and /-rfs/. Note that the first position is occupied by /l/ or /r/ (both liquid sonorants), the second by obstruents, and /s/ always occupies the final position.

As was pointed out elsewhere CCC-clusters are formed with the addition of -s to words ending in CC-clusters, resulting in CCC-coda clusters such as lomps, sterks, velds, volts, wêrelds. This is a relatively productive formation too.

The same remark concerning /s/ as C2 in CC-codas above is relevant here in the case of C3 in that it in a traditional approach it should be accepted as a violation of the Sonority Sequencing Principle.

Van Oostendorp (1995) poses an interesting solution for this problem in the case of Dutch.

Finally it should be mentioned that Afrikaans does not have the same problem as Dutch does with a word like herfst /hɛrfst/ [hɛrfst] autumn, fall ending in four consonants: Afrikaans only has herfs /hɛrfs/ [hɛrfs] autumn, fall.

For co-occurrence restrictions between the constrituents of the Afrikaans rhyme, viz. the nucleus and the coda, see The Afrikaans Rhyme.

References:
⇑ Back to top
ABOUT THIS TOPIC
Author(s):
Daan Wissing
Category:
Afrikaans Phonology
Publication date:
14 May 2020
Keywords:
syllablephonotacticscoda
cite
print
report error
This is a beta version.
Jump to: