Some long vowels systematically alternate with short ones when stress placement is shifted to another part of a word. This is to be observed especially in the case of the long, mid-high vowels /o/ and /e/. Examples of the former vowel are provided in the following description, and of the latter in Quality alternation of front vowels. Here the focus is on /o/. Depending on the phonetic context it may be realised as either [uə], [u], [ɔ] (or even [ə]).

In most Afrikaans phonologies, the long, mid-high, back vowel is treated as a monophthong, despite the fact that it is mostly realised as a diphthong, namely [uə]. The same holds for the other long mid-high vowels, /e/ in mees, produced as [miəs] most and in the unrounded version of /ø/ (neus, like in [niəs] < /nøs/. In this regard, see for example the well-known text books Le Roux and Pienaar (1927), Posthumus (1969), Wissing (1982), Combrink and De Stadler (1987), De Villiers and Ponelis (1987) and Coetzee (1992). Klopper (1987), however, contends that these vowels are phonemically diphthongs, viz. /uə/ and /iə/. In short, the level of abstractness of the underlying phonemic representations of these vowels is a matter that still has to be attended to in the case of Afrikaans. The same applies to Standard Dutch as spoken in the Netherlands (see the topic on the unrounded high-mid front vowel /e/) in relation to which a similar approach is followed in the case of the mid-high front and back vowels, /e/, /o/ and /ø/, realised as narrow closing diphthongs  [ei], [ou] and [øy]. In Belgian Standard Dutch these vowels are, however, realised as monophthongal. We follow here the example of Standard Dutch. Note that in recordings of early Afrikaans these vowels have a monophthongal character. In some regions of South Africa, especially in the Northern Cape (Springbok and surroundings) the same monophthongal qualities may still be observed. De Villiers and Ponelis (1987) highlight the diverse phonetic character of these three vowels, and opt for the cover symbols /e:/, /o:/ and /ø:/. Most recently Wissing (2017) holds this position too.

Figure 1 provides a graphic display of the various common allophones of /o/. In this section the specific phonological rules will be handled in more detail.

Figure 1: A mapping of phoneme /o/ to its allophones. 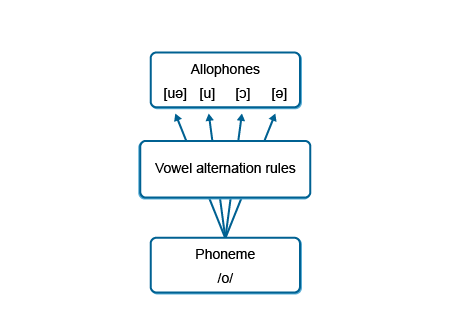 The following are informal rules that capture strong tendencies for the respective allophonic realizations of /o/. Note the central role of stress position:

Examples of vowel alternation rules for allophones of /o/:

By way of demonstration of the applicability probability of these rules, consider the following, taken from the readings of news bulletins in the RSG database. In such bulletins the occurrence of most words in Table 2 below is unlikely, though still quite well-known in Afrikaans.

Out of 53 instances of probleem (also the plural: probleme) by eleven different RSG announcers, the vowel of the first syllable is realised 50 times as [u] (i.e a RAP of 0.94) and three times as [ɔ] by the same individual. Similar results are found for persoon /pɛrson/ [pɛ/ər'suən] person, with stress on the second syllable, and personeel /pɛrsonel/ [pɛrsu'niəl] personnel. The RAP for [uə] in the former (5 speakers; 15 instances) is 1.0; for the latter (9 speakers; 17 instances) /o/ was realised in all cases as [u]. The allophone in persoon is in line with 1. in Table 1, and personeel with 2.

In the following examples the role of stress position in determining the allophone of /o/ is provided. 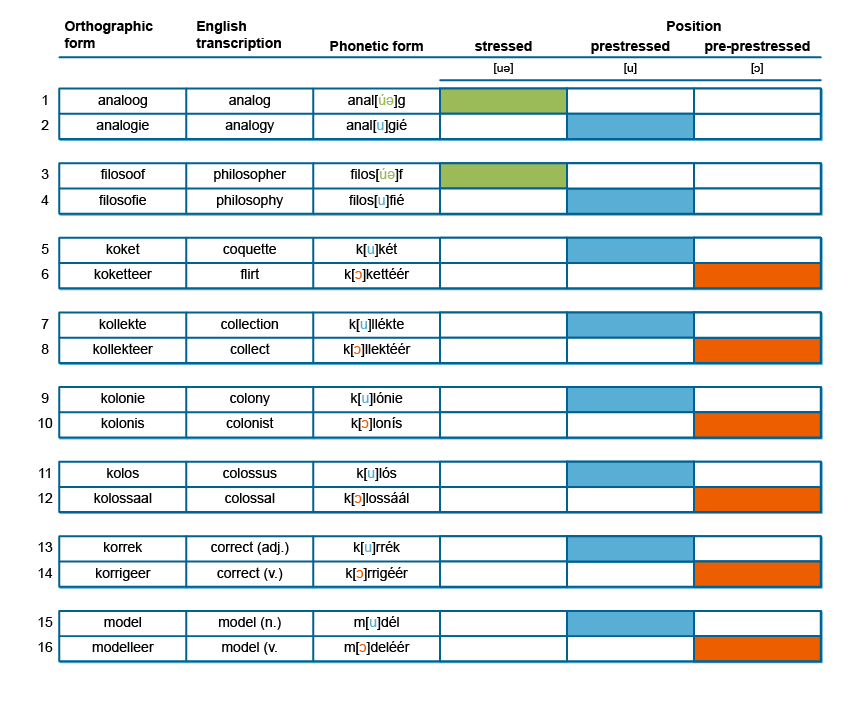 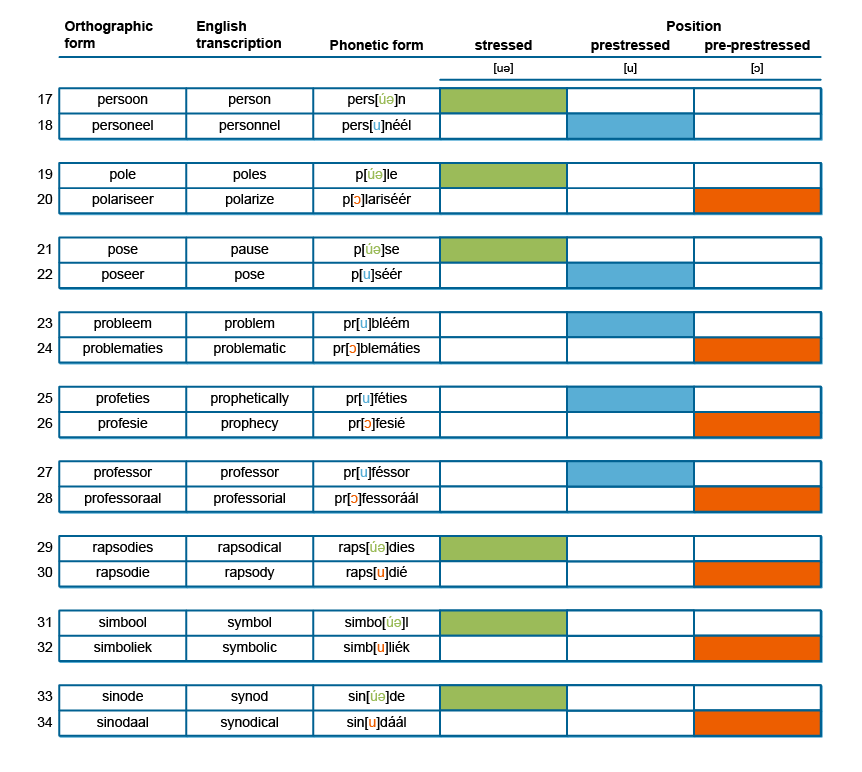 Alternation between [uə] and [u] is sometimes also in a number of special cases, as in soveel /sofel/ [su'fiəl] so much, or sodat /sodɑt/ [su'dɑt] so that, sodra /sodra/ [su'dra] as soon as, sowat /sovɑt/ [su'vɑt] approximately, and sowel /sovɛl/ [su'væl] as well, especially in unaccented sentence positions. As monomorpheme, so /so/ so in sentence context is also frequently produced as [su]. Examples found in the RSG database include: so + aan, bestendig, bly, gou, groot, hoog, jonk. Although not as commonly, this also holds for other, highly frequently used words as glo /xlo/ [xluə] supposedly, rendering [xlu], in combination with words like die, nie, nodig and slegs, also present in the RSG database. This also goes for soos /sos/ [suəs] like, being rendered as [sus] quite frequently.

Noteworthy is that in some nonstandard varieties of Afrikaans – as in, for example, Cape Afrikaans – forms like [lup] (loop walk) are lexicalised, and thus do not alternate with any other form (see De Villiers and Ponelis 1987); these forms reflect an earlier pronunciation which was later diphthongised, as currently to be observed in Standard Afrikaans.