The most well-known case of length variation of vowels when they are followed by /r/ in Afrikaans is that of the short high vowels /i, u y/; other instances of such variation are also present, especially of the short mid-high, non-central vowels, viz. /ɛ/ and /ɔ/. The three short vowels /ɛ ɔ ɑ/ sporadically lengthen before /n/ as well; so do /ɔ/ when followed by /l/. Here we concentrate on the influence of /r/ only.

(Le Roux, T.H.; Pienaar, P. de V. 1927) Combrink and De Stadler (Combrink, J.G.H.; De Stadler, L.G. 1987) De Villiers and Ponelis (De Villiers, M.; Ponelis, F.A. 1987) provide some examples of the process whereby /i, u, y/ lengthen when followed by tautosyllabic /r/. These are provided in the Extra below, in both monosyllabic and multisyllabic words . De Villiers and Ponelis do not mention the possible role of syllable structure or stress position. The same applies to Le Roux and Pienaar as well as Combrink and De Stadler. As will be pointed out below, in the Note, stress does have an effect, albeit to a limited degree. 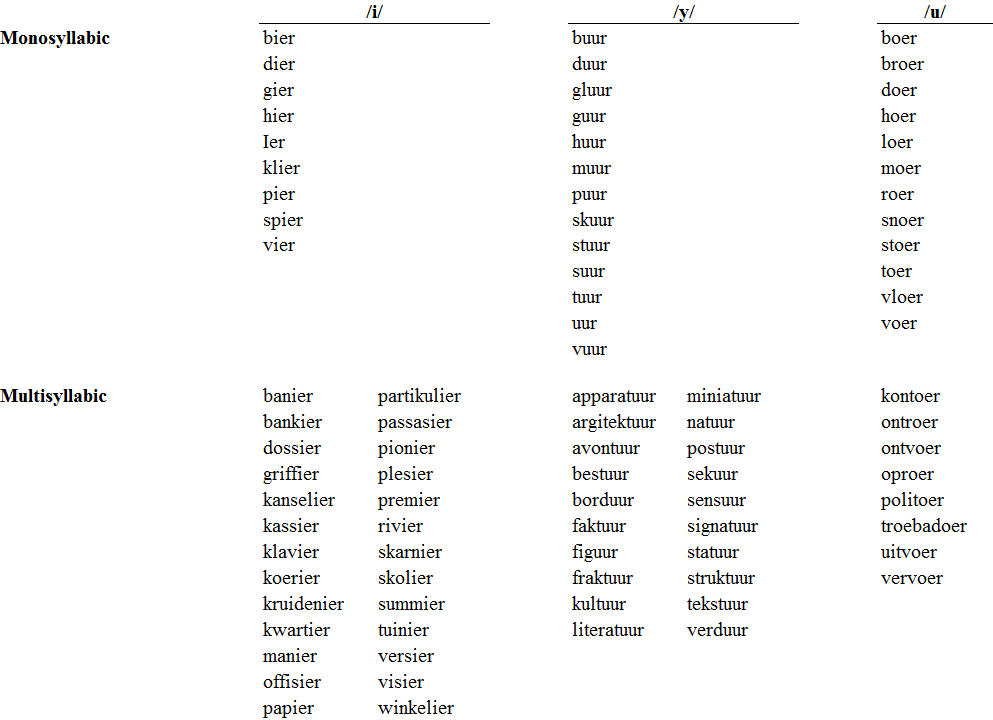 While there are a number of words in which these vowels are long before /r/, they do mostly vary with short vowels in the same word. De Villiers and Ponelis summarise the situation as follows (somewhat rearranged, but with their examples):

De Villiers and Ponelis (1987) mention the following categories in which /ɔ/ is long before /r/:

Note that these lists are not complete. Also some degree of variation within some of the words is probable.

In conclusion: no hard and fast rules are present regarding the length of vowels before /r/, especially /ɛ/ and /ɔ/, though to a lesser degree, this also holds for the more well-known instances of /i u y/ when followed by /r/. Furthermore, syllable structure (open or closed) and even stress do not always play a role.

X
Other topics with the keyword 'lengthening effect of /r/'