Nasalisation is a distinct feature of Afrikaans. This topic focuses on heavy nasalisation, which is a relatively well-known characteristic of especially Standard Afrikaans.

Nasalisation occurs when the nasal tract is combined as an additional resonator. This is achieved via a lowering of the velum which allows air from the lungs to escape partially through the nose and partially through the mouth. Some descriptions of this process propose a difference between light and heavy nasalisation. Light nasalisation refers to the articulation of a vowel or consonant with a relatively imperceptible nasal quality resulting from an adjacent nasal consonant or because the port to the nasal cavity has been left open because of a lowered velum. As a result, a vowel, for example, would receive a nasal character that, while imperceptible, is still present under the influence of the adjacent (mostly following) nasal consonant (Van Wyk 1977, Coetzee 1992). Heavy nasalisation is more readily perceptible. Vowels, when followed by the alveolar nasal consonant /n/ + fricative consonants, especially /s/, usually though not exclusively as coda of the same syllable, are produced with a distinct nasal quality and undergo a degree of lengthening. At the same time, the nasal consonant may be shortened, or even deleted altogether. In heterosyllabic instances, albeit to a very limited extent, the segment following /n/ can be, apart from the fricative consonants, a phoneme other than stop consonants. Heavy nasalisation is particularly prone to variation, inter- as well as intra-personal. Only a handful of words has reached the status of being lexicalised in terms of heavy nasalisation and therefore in principle not prone to variation.

[+]Overview of current descriptions of nasalization in Afrikaans

Nasalization – in effect heavy nasalization – has been a distinct characteristic of the vowel system of Afrikaans for at least since the first part of the 20th century (Le Roux and Pienaar 1927). In recent years, heavy nasalization is seemingly only to be observed to a limited extent in the pronunciation of mainly older white speakers. According to Coetzee (1992), the presence of nasalization is not evenly spread across the country; it is, at least in the Transvaal (currently Gauteng and adjacent provinces) more to be expected of persons of the high-to-mid social classes. It is not reported in the literature to be a feature of the Afrikaans of Coloured speakers. The same applies to light nasalization. As a rule, white speakers of the same age tend to exhibit significantly more light nasalization than their Coloured counterparts (in those cases where heavy nasalization is not found). See the Extra below for details concerning an experiment to this effect.

In an ongoing project by two groups of researchers (Andries Coetzee, Pam Beddor, Will Styler (University of Michigan) and Daan Wissing and Ian Bekker (North-West University)), speakers of so-called White and Coloured Afrikaans read a word-list that contained, inter alia, words of the form CVNC dans, pens, bont. Speakers held a soft silicone mask over their faces during the task. This mask was connected to a pneumotachograph, enabling the measurement or oral and nasal airflow during speech. Based on these airflow measures it is possible to determine the exact moment that nasal airflow starts during the production of the vowel. Initial results show that nasal airflow starts both earlier and is of a higher volume in White than in coloured Afrikaans. In fact, for many speakers of White Afrikaans, nasal airflow is present throughout the vowel, indicating extensive anticipatory nasalization. On the other hand, for many speakers of Coloured Afrikaans, nasal airflow is registered only for the last 5-10% of the vowel, indicative of no or very limited anticipatory nasalization.

Coetzee (1977) differentiates between /n/ deletion and nasalization. Here we focus mainly on the latter. She offers an overview of nasalization that covers both the earliest work, notably that of Le Roux and Pienaar (1927) and later descriptions, viz. (Posthumus 1963; Van Wyk 1977). The descriptions of Combrink and De Stadler (1987) and De Villiers and Ponelis (1987) may also be consulted alongside the various more comprehensive works by Coetzee(1974), (1981). Coetzee and Van Reenen (1995) place nasalization in a historical perspective.

Many nasalised forms are frequently mentioned in Le Roux and Pienaar's (1967) prestigious Uitspraakwoordeboek van Afrikaans as the only acceptable form, thus without non-nasalised counterparts. It may be questioned whether this applies to present-day Afrikaans, especially in the case of younger speakers. As far as the available data makes it possible, this assumption has been tested specifically for the present topic of nasalization (see below). The RSG-database (RSG: Radio Sonder Grense, a nationwide Afrikaans radio station – Introduction to phonological processes) consisting of the news readings of a number of radio presenters of various ages, was used to test this assumption. In short, the hypothesis was that some of the older personalities (of roughly 55 years or older) would more readily exhibit nasalization over a wide range (not only of lexicalised forms but also in other contexts ) than would younger persons (round 30 years of age).

Nasalization occurs predominantly in high-frequency words, as is normally the case with most other phonological processes. No information is available regarding the impact of speaking style; it might be, as in the case with other phonological processes, that nasalization occurs more readily in casual than formal speech, although it might be possible that nasalization is a from of prestige, in which case the opposite would be expected.

In the following sections, some extra-linguistic factors impacting on the occurrence of nasalization in Afrikaans are briefly mentioned, followed by the relevant phonetic contexts in which it may occur.

Coetzee (1992) mentions some regional and socio-pedagogical factors that enhance the presence of nasalization in Afrikaans. While in some regions nasalization occurs quite commonly, in others its absence is notable. In the former Transvaal (currently Gauteng and adjacent provinces) speakers of high social background tend to nasalise more. In principle, all extra-linguistic factors which enhance the application of phonological processes could in principle be of importance here too. Specifically, it seems that ethnicity is of importance, as is suggested by Coetzee (1977) and Coetzee (2014) (unpublished report – see Extra above). Seemingly, Coloured speakers generally do not nasalise to a notable extent. The age of the speaker is also of potential importance. Though not extensively researched, it seems that nasalization is less prevelant in the case of younger speakers, indicative of a sound change in process.

Heavy nasalization occurs within simplex word boundaries as well as across morpheme and sentence boundaries. Some cases that have been lexicalised are reported (e.g. by Posthumus (1963), (1963), and De Villiers and Ponelis (1987)). Posthumus (1963) names such instances "vaste woordnasalering" (fixed nasalization of words). Some examples are: dans [dɑ̃:s] dance, xans [xɑ̃:s] goose, mens [mɛ̃:s] human being, ons [ɔ̃:s] us, we, kans [kɑ̃:s] chance. Posthumus (1963) adds more examples, such as pens [pɛ̃:s] belly, hans [ɦɑ̃:s] tame, saans [sɑ̃:s] in the afternoon. She also mentions frequent nasalization in derivations from prefixes like inge-, onge- and aange-. Examples are respectively ingeval [ə̃:xəfɑl] in case, ongeluk [ɔ̃:xəlœk] accident and aangesien [ã:xəsin] given that.

In essence, the following examples can be considered as representative (see Coetzee 1992); the transcriptions are quoted directly from her article):

Except for the general articulatory definitions of nasalization, no specific acoustic features are mentioned in available descriptions. Such features are extremely technical in nature, and, although it is possible to utilise such information in principle, it is not a feasable route to follow in this general overview. Suffice it to mention the following specific acoustic and temporal features, given, for example, in the recent dissertation by Styler (2015). Nasalised vowels generally show higher F1-values and a steeper spectral tilt than their non-nasalised counterparts, and are typically longer than their non-nasalised counterparts.

In the figure beneath a non-nasalised version of the word ongeag despite is compared to a nasalised form of the same word. The typical features of nasalised vowels are evident (see also Note below).

Figure 1: Oscillographs and spectrograms of a non-nasalised (A) and nasalised (B) version of <ongeag>
.
Figure 1 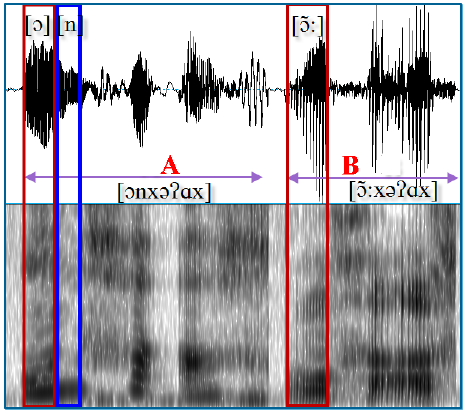 In what follows, the degree of nasalization in Afrikaans as traced in the RSG-database is scrutinised. Take note that all of these recordings are in the domain of news bulletins, so that, inevitably, some Afrikaans words are not likely to occur, despite their frequency of usage in General Afrikaans. The first person plural pronoun ons is a typical instance.

Here we take as prototypical the lemma mens human being and its occurrence in derivations (e.g. plural form mense) and compound words, such as menslik, menseregte, menseregtekommissie or menseregtekwessies. It total 229 such cases are present in the RSG-database of 2000 – 2006 (aged 50+). Due to this high number, we limit the inspection of the presence of nasalization to that of six male presenters and two available female presenters, all of them at the time of recording older than 50 years. 45 instances of similar constructions from younger speakers were analysed in the 2017 set of recordings. The smaller amount is due to the fact that only two presenters, one male and one female, were available in the age bracket < 40 years. Taking the ages of the two groups and the period of recording into consideration means an age difference of roughly 25 – 30 years, probably sufficient for the detection of a possible trend in the history of nasalization in Afrikaans.

As stated above, some words are taken to be lexicalised in their nasalised forms (see Grammatical categories). Here we analyse the most frequently used of them, viz. mens. ons is actually used much more frequently in conversations, but, as indicated elsewhere, clearly falls outside of the domain of news bulletins.

The Rule Application Probability (RAP) for this group regarding nasalization in the different forms of the word mens is 0.88. For the six males RAP is 0.98; for the females only 0.48. Notably, one female's RAP nearly equals that of the male speakers, viz. 0.88, while that of the other female is only 0.09. The nasalization of vowels does not exclude the presence of [n] altogether. Where it does occur, it's duration is rather small, typically around 25 ms, whereas [n]'s in non-nasalised instances are much longer (> 45 ms in most cases).

Again, due to the setup and aim of the present description, the prototypical prefix aange- is taken as representative. The same individuals as above were analysed.

Nasalization for this type of derivation is notably absent in this group. The female presenter nasalised only two of the 15 possible cases; the male none out of 20.

Without quoting specific RAP indexes, the general trend in this category is in line with the results already given: the 2000 – 2006 readers' degree of nasalization is significantly higher than that of the younger presenters as far as nasalization across phrase boundaries is concerned.

Although taking into consideration unevenness regarding factors such as the size of the groups investigated, as well as evidence for clear inter-individual variation, the results provided above nevertheless strongly suggest the possibility of a sound change currently taking place in Afrikaans. This is a fascinating theme still to be examined in detail.