Short /ɑ/ occurs frequently in multisyllabic polymorphemic words. For the purposes of the Main Stress Rule (MSR) we focus on the word-final position in closed as well as open syllables, as well as on the penultimate position. Note that this is contrary to the case in Dutch, where short /ɑ/ is not allowed word-finally. In general, stress is placed on syllables preceeding word-final /ɑ/, thus penultimate stress in such words is predominant. The most telling example concerning the behaviour of /-ɑ/ in terms of stress placement is the Afrikaans adoption of the internationally widely-used five-syllable word abracadabra /ɑ.brɑ.kɑ.'dɑ.brɑ/. Note that all instances of the vowel in this word are pronounced as short, contrary to Dutch, where this vowel is transcribed as long (see inscription in Celex database: abracadabra\a.b.r.a.k.a.d.a.b.r.a.\a-bra-ka-'da-bra). The typical Afrikaans word koekemakranka /ku.kə.mɑ.'krɑŋ.kɑ/ is also illustative in this regard.

The following articles should be taken into account as important background information:

Here /ɑ/ will be treated in terms of its place and role in the stress pattern of Afrikaans bisyllabic and multisyllabic monomorphemic words. Firstly we concentrate at this vowel in closed syllables word-finally, and then in open syllables.

In the following Extra, bisyllabic and multisyllabic monomorphemic words with /ɑ/ word-finally are listed, all of them found in a variety of sources, like dictionaries and other available electronic word-lists.

In this section we focus on monomorphemic words ending on a single nonsonorant, i.e. obstruent consonant. Many cases of double consonant codas exist, where the first consonant is a sonorant (double obstruents do not occur in Afrikaans. In Note 7 beneath a number of such words, all ending on <nt> is given, representative of other, similar cases ending in sonorants plus obstruent, viz. <lt>, <rt>, <nd>, <rd>, <lp>, <rp> etc. 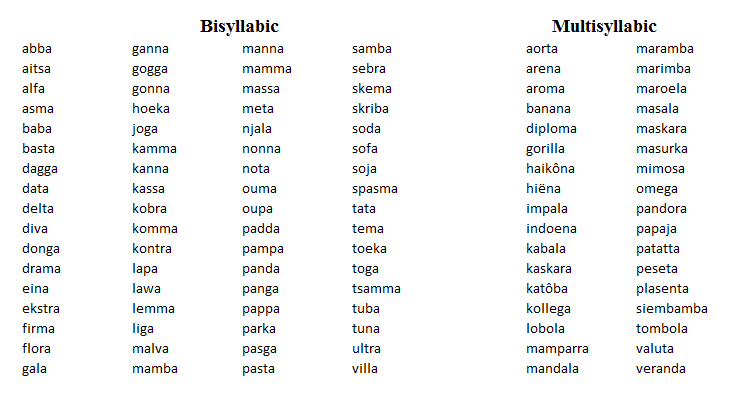 The stressed vowels in these words occur in both open and closed syllables and vowels are not restricted as to type i.e. both short and long (monophthongal and diphthongal) vowels occur frequently in these examples. Syllable position (i.e. penultimate) is thus the only robust factor here in terms of stress placement.

The existence of quite a number of place names recently adopted or imported into Afrikaans needs mentioning. They are of special interest in that the assignment of stress position in newly adopted words may provide important means for the falsification of proposed stress rules (Neijt, Anneke and Zonneveld, Wim. 1982). (Kager, R. 1989) also mentions imported words alongside mispronunciations in this regard.

Note that such adopted place names in Afrikaans provide an interesting and important perspective on the possibility of incorporating the Three-syllable Window principle into Afrikaans, as is the case in Dutch. According to this principle, primary stress can only fall on one of the last three syllables of a monomorphemic word (see e.g. (Kager, R. 1989); (Trommelen, M.; Zonneveld, W. 1989); (Booij, Geert 1995); and also Three-Syllable Window in Dutch. As is the case with Afrikaans, however, native (Germanic) words in Dutch are too short to demonstrate the relevance of this principle, for they usually contain only one full vowel. This necessitates looking at adopted words, all of which adhere to the Three-Syllable Window principle. Some telling examples, cited by (Kager, R. 1989) are: Ashurbanipal, Carvancevitam, Demosthenes, Erechtheion, Melanchton . Only a small number of quadrisyllabic Dutch toponyms and Latin grammatical terms incorporated into Dutch are exceptions, all of which show pre-antepenultimate stress e.g. the name of the city of Scheveningen ['sxe.vә.nɪŋ.ә(n)], and the grammatical term infinitief ['ɪn.fi.ni.tif]infinitive. Note that, in Afrikaans, stress placement on the equivalent of these two words is on the final syllable.

In the Post-Apartheid era, a number of former Afrikaans geographical names have been replaced by African (languages of the Bantu family) ones, e.g. Mpumalanga (Eastern Transvaal), Mbombela (Nelspruit), Bela-Bela (Warmbaths), KwaDukuza (Stranger), Senwabarwana (Bochum). These names exist alongside other, naturalised names, that were incorporated earlier into Afrikaans, e.g. Marikana, Phalaborwa, Phutaditjhaba, Bophuthatswana. Note that all of these names carry penultimate stress in the case of Afrikaans speaking persons' pronunciation. Other multisyllabic place names ending on a variety of vowels include Ekhuruleni, Empangeni, Eshowe, Giyane, Hluhluwe, Hlanganani, Khayalami, Mabopane, Malelane, Modimolle, Mokopane, Mpumamlanga and Polokwane. Penultimate stress in these cases supports the existence of the Three-Syllable Window principle in the case of Afrikaans too. Note that the view of Van Oostendorp (Three-Syllable Window), that the overriding of the Three-Syllable Window principle, in the case of a number of Dutch exceptions, should be regarded as a diachronic effect of loanword adaptation, is not relevant here., : According to him, Dutch speakers may have adopted words like Scheveningen and infinitief , as mentioned above, with the stress pattern of the source languages retained. In the case of Afrikaans, however, and in terms of its adoption of words from indigenous languages, it is widely assumed that syllable-timed languages, like the Bantu languages, do not exhibit linguistic stress (cf. (Cole, D..T. 1953)): "… there is no indication that stress has any significant function whatsoever in this language." Consequently, it is reasonable to assume that speakers adopting names from these languages are simply applying the rule of Afrikaans penultimate stress, the overall patterning of which is to be taken as strong support for the proposed synchronic phonological stress-assignment rules.

Given the above, penultimate stress-assignment in the first names and surnames of current prominent South African politicians should be treated along the same lines. Holomisa, Komphela, Madonsela, Madiba, Makwetla, Malema, Mandela, Ramaphosa, Zwelinzima, are a few well-known examples .

[+] Words ending on <a> with antepenultimate stress 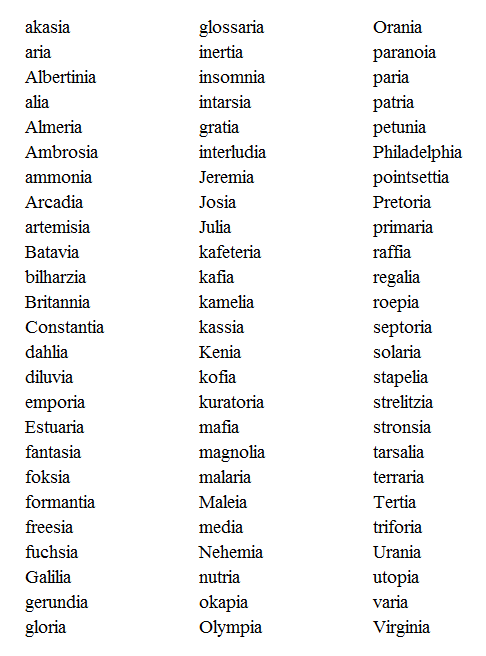 [click image to enlarge]
Most of the examples of the <-ia> type of words have antepenultimate stress, irrespective of word length. Stress on the penultimate syllable seems to be restricted to proper names, e.g. Jeremia, Maria, Samaria, Sofia. Interestingly Maria in languages such as Croatian is written as Marija.
References:
Suggestions for further reading ▼
phonology
Show more ▼
morphology
Show more ▼
syntax
Show more ▼
⇑ Back to top
ABOUT THIS TOPIC
Author(s):
Daan Wissing
Category:
Afrikaans Phonology
Publication date:
07 August 2019
Keywords:
stress short -a word-final
cite
print
This is a beta version.
Jump to: