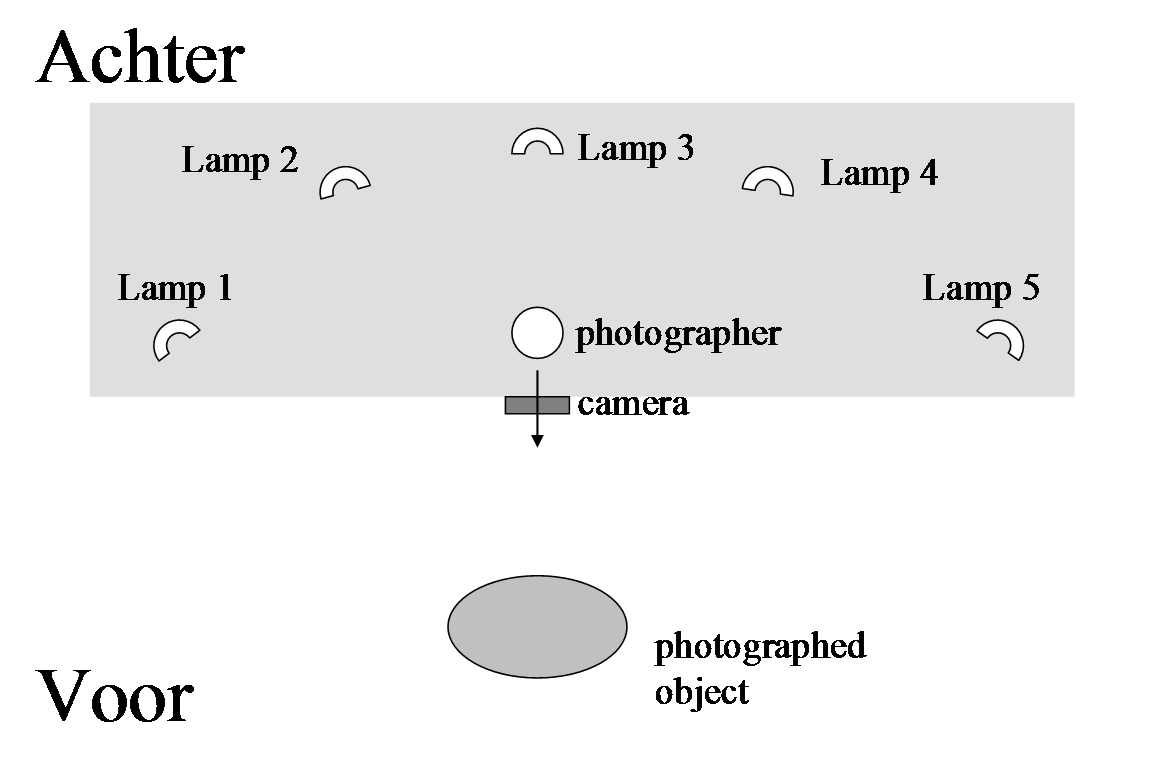 The difference between modifiers like recht'straight' and vlak'right' is that the former specifies the spatial relation between the located and the reference object with respect to the orientation, whereas the latter specifies the distance between the two. That these two kinds of modifications are possible is not a coincidence; Section 1.3.1.1 suggested that, instead of referring to a region, locational PPs can be considered to denote sets of vectors that take the reference object as their starting point, as in the more abstract representation of the situation in Figure 1 given in Figure 2, which is also taken from Section 1.3.1.1, sub Section 1.3.1.1, sub III. 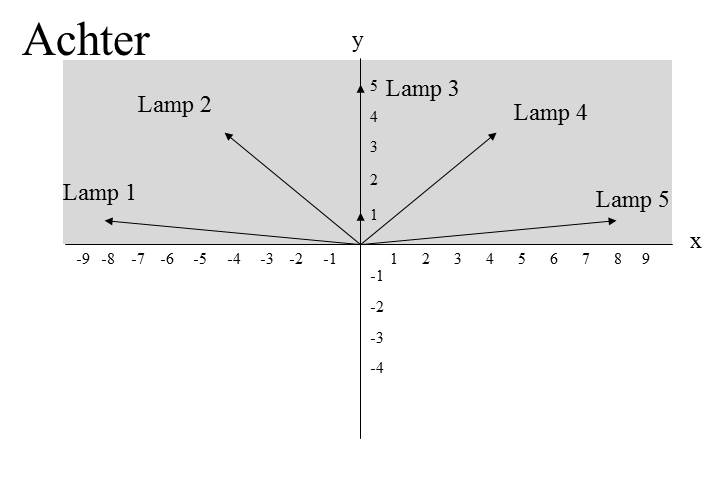 The PP achter de camera denotes the set of vectors V‹x,y› that originate in (0,0) (= the position of the camera), and have their endpoint somewhere in the grey area, that is, for which y > 0. Modifiers are used to restrict this set. The modifiers of orientation select a subset on the basis of the direction of the vectors: the modifier recht'straight' in (4a) selects the subset of vectors for which x = 0, whereas the modifier schuin'diagonally' would select the vectors for which x ≠ 0. The modifiers of distance select a subset on the basis of the magnitude (length) of the vector: the modifier vlak'right' in (4b) restricts the set of vectors to those that are smaller than a certain contextually given magnitude m, whereas the modifier ver'far' restricts the set to those vectors that are longer than a certain contextually given magnitude m', where m < m'.
In the examples above, the reference object is represented as a point in space. The vector approach to prepositions becomes slightly more complicated if the reference object is represented as a three-dimensional object. Consider the examples in (5). Example (5a) can refer to the situation in Figure 3A if the nominal modifier is twee kilometer but not if it is vier kilometer. Similarly, (5b) can refer to Figure 3B if the adjectival modifier is recht, but not if it is schuin. The contrasts found in (5) would of course be unexpected if the vectors 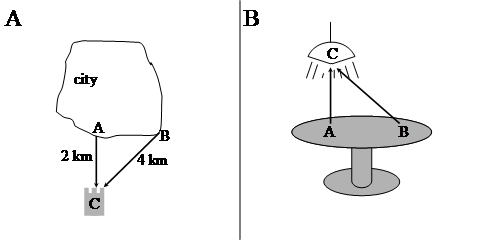 Note in passing that the modifier recht in (5b) can also be used to express that the lamp is situated right above the center of the table. This may follow if we assume that, under that reading, the table is in fact mentally represented as a point in space, but we will not dwell on this.
Now that we have recapitulated the basic aspects of vector theory, we can discuss modification of spatial adpositional phrases. We will show in Section 3.1.2 that vector theory provides us with a proper understanding of the modification possibilities: PPs headed by prepositions that denote sets of vectors can be modified for orientation and distance, which is clearly connected to the fact that vectors have an orientation and a magnitude. Given the fact that the null vector lacks these properties (the magnitude of the null vector is zero, and the vector therefore does not have an orientation either), it is to be expected that locational PPs that denote the null vector cannot be modified by modifiers of orientation or distance. Section 3.1.3 will show that, despite seeming counterexamples, this prediction is indeed borne out. Section 3.1.4, finally, discusses modification of directional adpositional phrases. It will be shown that in this case the possibilities are restricted to modifiers that express to what extent the implied path has actually been covered.

readmore
References:
⇑ Back to top
ABOUT THIS TOPIC
Author(s):
Hans Broekhuis
Category:
Dutch Syntax
Publication date:
14 May 2020
This topic is the result of an automatic conversion from Word and may therefore contain errors.
A free Open Access publication of the corresponding volumes of the Syntax of Dutch is available at OAPEN.org.
cite
print
report error
Jump to: