This section discusses the uses of the simple tenses. We will assume that the default interpretation of these tenses is as given in Figure 25, and that eventuality k can thus precede, follow or overlap with n/n'; in other words, the default interpretation of the present j of eventuality k is identical to the present/past i of the speaker/hearer. We will further argue that the more restricted/special interpretations of the simple tenses do not require any special stipulations but follow from the interaction of three types of linguistic information.

The discussion will focus on the simple present as we assume that the argumentation carries over to the simple past (although this may not always be easy to demonstrate); we will see, however, that the use of the simple past sometimes triggers some special effects.

In their discussion of non-temporal analyses of tense, Boogaart & Janssen (2007:808ff.) discuss a number of examples in the simple present in which the eventuality takes place before speech time. Two of their examples from, respectively, English and Dutch are given as (339). Boogaart & Janssen also claim that the fact that the telling/asking precedes n or, in their words, "took place in the past" is problematic for temporal theories of time given that "such discrepancies cannot be accounted for coherently in exclusively temporal terms."

From the point of view encoded in Figure 25, this claim is clearly premature given that simple present examples such as (339) are precisely what we expect to arise, provided at least that eventuality k is included in present i of the speaker/hearer. Simple present tense situations in which the eventuality k precedes or follows speech time n also arise if the speaker provides a second hand report. When Els promised the speaker yesterday to read his paper today, the speaker may utter example (340) at noon to report this promise, even if Els has already read his paper in the morning or if she will start reading it later that day.

The fact that we are able to account for the fact that the simple present may also refer to an imperfect eventuality preceding or following n by assuming that Dutch does not express the binary feature ±posterior within its verbal system provides strong support for the binary tense theory. This especially holds because this cannot be expressed by means of the Reichenbachian approaches to the verbal tense system; such approaches must treat such cases as special uses of the simple present.

The default interpretation of example (340) can be overridden by pragmatic considerations. In the context given above the split-off point of the possible worlds precedes present-tense interval i, and therefore also precedes speech time n. If the speaker is able to monitor Els' doings, however, the split-off point of the possible worlds coincides with n, and in this case example (340) can only be used to refer to the situation depicted in Figure 27, in which eventuality k must follow or overlap with n. 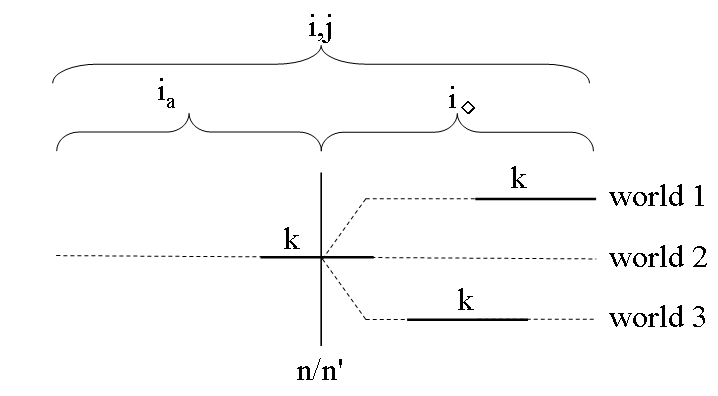 The fact that the simple present cannot be used if the eventuality precedes n is entirely due to pragmatics; since the speaker knows that eventuality k precedes n (that is, that k is presented as completed within the actualized part time interval ia of the present-tense interval),he can describe this situation more precisely by means of the perfect (see Section 1.5.4.2, sub II and Section 1.5.4.2, sub III), and Grice's maxim of quantity therefore prohibits the use of the less informative simple present.

The interpretation of example (340) can also be restricted by grammatical means, more specifically, by the addition of temporal adverbial phrases, as in (341). Note in passing that, under the working assumption that the speech time is noon, (341a) is only felicitous if the split-off point of the possible worlds precedes speech time n; if the split-off point coincides with n the present tense is excluded for the pragmatic reasons discussed in the Subsection II. 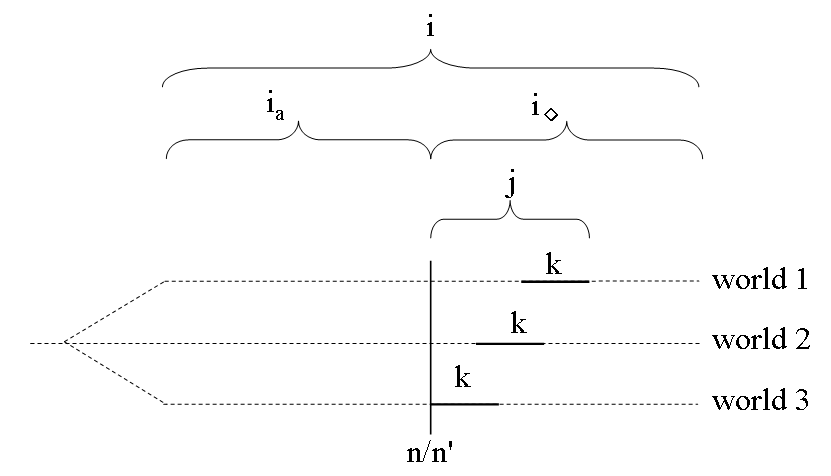 The effect of adverbial modification of interval k is especially conspicuous with momentaneous events like bereiken'to reach' in (343); this example asserts that in all possible worlds eventuality k is located within the interval j denoted by vanmiddag'afternoon' and includes 3 p.m. Since the eventuality is momentaneous, this implies that the eventuality will take place at 3 p.m. in all possible worlds (where 3 p.m. is, of course, both intended and interpreted as an approximation: "approximately at 3 p.m.").

One may claim that the resulting reading of (343) is not due to the independent modification of the time intervals j and k, but that we are dealing with a single adverbial phrase vanmiddag om drie uur. That this is a possible analysis is undeniable given that the whole string is able to occur in clause-initial position, but example (344) shows that the proposed analysis is also a possible one: the string vanmiddag om drie uur can be split and the two parts are assigned different scopes with respect to the modal adverb waarschijnlijk'probably'.

The fact that present/past-tense interval i can contain multiple occurrences of the eventuality denoted by the lexical projection of the main verb is exploited to the full in habitual constructions such as (346), in which a regularly occurring eventuality can be expressed without the use of an overt adverbial phrase. The availability of this reading may again be a matter of pragmatics, but there are also analyses that postulate empty operators with a similar function as frequency adverbs like altijd or vaak; see Oosterhof (2008) for examples of such proposals.

Present-tense examples such as (348) allow at least two readings, which we may refer to as conditional and hypothetical. This subsection shows that the choice between the two readings is pragmatic in nature.

The conditional reading is the default reading and expresses that for any subinterval in the present-tense interval for which it is true that the speaker has enough money, it will also be true that the speaker will go on holiday. The hypothetical reading is pragmatic in nature and arises if the actualized part of the present-tense interval is considered irrelevant: the utterance expresses that in any future world in which the speaker has enough money, he will go on holiday. The ambiguity between the two readings can be resolved by means of adverbial modification.

Modification of the consequence of the construction by means of a frequency adverb like altijd'always' favors the conditional reading, whereas modification of the antecedent by a temporal adverbial phrase like volgend jaar'next year' triggers the hypothetical reading. That this is more than just a tendency is shown by the examples in (350). Given that (350a) expresses an established fact of chemistry, it is only compatible with a conditional reading. This is reflected in that it is easily possible to modify the consequence by a frequency adverb, but that modification of the antecedent by a time adverb leads to an infelicitous result.

Past-tense examples such as (351a) also allow at least two readings. The first is again conditional but the second is counterfactual rather than hypothetical. We will argue below that the choice between the two readings is again pragmatic in nature. Note that examples such as (351b) are special in that the conditional reading is excluded: this is, of course, due to pragmatics as it is a priori unlikely that the antecedent of the construction will be true in any possible world.

The conditional reading is again the default reading and expresses that for any subinterval in past-tense interval i for which it is true that the speaker has money, it is also true that the speaker goes on holiday. The counterfactual reading arises if the antecedent of the construction is not or not expected to be fulfilled in the speaker's actual world (within the relevant past-tense interval). First, if the condition expressed by the antecedent of the construction had been fulfilled in the speaker's actual world before speech time n, the speaker could be more precise by using example (352a). Secondly, if the speaker believes that the condition will be fulfilled in some of the possible worlds that have their split-off point at speech time n, he can be more precise by using, e.g., example (352b).

The maxim of quantity therefore leaves the addressee no other choice than to conclude that the speaker believes that the antecedent in (351a) is only fulfilled in possible worlds other than the actual one, which furthermore must have a split-off point preceding n. This leads to the counterfactual interpretation.
An interesting fact about conditionals and counterfactuals is that als-phrases often alternate with constructions without als, in which the finite verb occupies the first position of the clause. Such verb-first constructions can be used to express wishes, especially if a particle like maar is present; note that under the wish reading the consequence can readily be left implicit. This shows that Grice's maxim of quantity is more generally applicable to derive irrealis constructions of various types.

Example (354a) shows that counterfactual interpretations also arise in examples with an epistemic modal verb in the past tense. This option is expected on the assumptions adopted so far: the past tense on the modal verb in the first conjunct indicates that some source had reason for assuming that collapsing of the house was unavoidable, while the second conjunct indicates that this assessment was wrong. Counterfactual readings are not possible in present-tense examples such as (354b); if the speaker and addressee know that the house did not collapse before speech time n, a future interpretation will arise for the pragmatic reasons indicated in Section 1.5.2, sub I.

The past tense of the modal verb zullen'will' is frequently used to express a counterfactual interpretation. Example (355a) is interpreted counterfactually for the same reason as (354a): the past tense of zullen indicates that to some source had information that suggested that the collapsing of the house would take place, but the second conjunct again indicates that this assessment was wrong. The present-tense counterpart of this example in (355b) again has a future interpretation for pragmatic reasons; see Section 1.5.2, sub II, for detailed discussion of this.

For more discussion about the relation between counterfactual interpretations and past tense, the reader is referred to Section 1.4.3, sub II, where it is shown that many instances of the German past subjunctive can be expressed by regular past marking in Dutch.

[+]  IX.  Denial of appropriateness of a nominal description

Pragmatics can also be used to account for the fact that the simple past can be used to express that a given nominal description is not applicable to a certain entity. Imagine a situation in which a pregnant woman enters a bus. All seats are occupied, and nobody seems to be willing to oblige her by standing up. An elderly lady gets angry and utters (356) to the boy sitting next to her. Since she knows at speech time that the boy had no intention to offer his seat, she implies by uttering (356) that the description een echte heer is not applicable to him. This use of the simple past seems very pervasive in children's games; examples such as (356b) are used to introduce a play, and the participants assume certain model roles.

This section has shown that the default reading of the simple tenses is that the time interval j, during which the eventuality denoted by the lexical projection of the main verb must take place, is identical to the complete present/past-tense interval: the eventuality may take place before, during or after speech time n/n'. In many cases, however, the interpretation is more restricted and may sometimes also have non-temporal implications. This section has also shown that this can be derived without any further ado from the interaction between the temporal information (tense and adverbial modification), modal information encoded in the sentence (the theory of possible worlds) and pragmatic information (Grice's maxim of quantity).