The previous sections have shown that the article may perform several functions. A definite article may pick out a certain entity or a set of entities from the domain of discourse (domain D). In the latter case, the set can be construed as a set of individuals (the distributive reading) or as a whole (the collective reading). Further, it can be used generically, in which case the noun phrase is construed as referring to (the prototype of) a class. Indefinite articles may be presentational, that is, introduce a new entity into domain D, or refer to an entity in domain D that is not assumed to be identifiable by the hearer. In both cases, two subcases can be distinguished: if the entity is known to the speaker we are dealing with a specific noun phrase; if it is not known to the speaker, we are dealing with a nonspecific entity. Finally, indefinite articles can be used in generic noun phrases, in which case we are dealing with categorial statements. This leads to the classification of the articles in Figure 2. 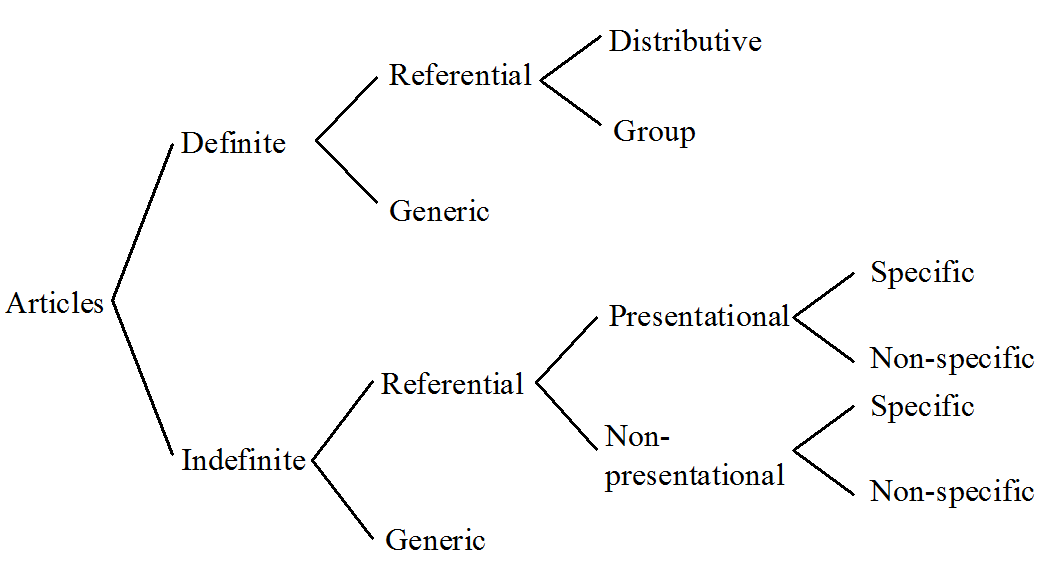 It should be noted, however, that there are many special cases in which the use of the article is not covered by this classification. A discussion of these special cases can be found in Section 5.1.4.

readmore
References:
⇑ Back to top
ABOUT THIS TOPIC
Author(s):
Hans Broekhuis, Marcel den Dikken
Category:
Dutch Syntax
Publication date:
07 August 2019
cite
print
This topic is the result of an automatic conversion from Word and may therefore contain errors.
A free Open Access publication of the corresponding volumes of the Syntax of Dutch is available at OAPEN.org.
Jump to: