By the process of rhotacism (not present in Dutch and to a very limited degree observable in Frisian) the Afrikaans voiced alveolar consonant /d/ quite frequently alternates intervocalically in unstressed syllables with [r] . In terms of a consonant sonority scale the change from a stop /d/ to a trill (or tap) /r/ can be explained as one of consonant weakening, or lenition (De Villiers & Ponelis 1987; Sebregts 2015).

From a comparison of acoustic analysis, it is reasonable to characterise the Afrikaans [r]-sounds both as either short trills or even as tap sounds. Henceforth, therefore, we use the phonetic symbol [r] in all examples of realizations of /d/.

Le Roux and Pienaar (1927) provide a number of cases of this process, though they do not use the term rhotacism, neither do(Combrink, J.G.H.; De Stadler, L.G. 1987); the latter include it under assibilation . (De Villiers, M. 1965) initially included cases of [r] that varies intervocalically with [d]/ under the category of assibilation as well, but in the revised version of this book (De Villiers, M.; Ponelis, F.A. 1987) it was replaced by the term 'rhotacism'.

Le Roux and Pienaar (1927) mention that this process was fairly recent at the time of the writing of their book, and more observable in the Western Province than elsewhere, and more readily in the case of younger speakers. Currently, indeed, it is much more wide-spread, as already indicated by De Villiers and Ponelis (1987), who stress the fact that rhotacism is to be observed even in formal speakings styles, such as in sermons and official gatherings.

In this topic we present a more complete survey of rhotacism as it is to be observed over a wide spectrum of pronunciation, especially in news bulletins of RSG (Radio Sonder Grense), the national Afrikaans radio station (see Introduction to phonological processes).

Examples of rhotacism cited in the literature mentioned above include beddegoed, bedding, bidde, gladde, koddig, medisyne, middag, mode, nodig, oorlede, padda, predikant, skeiding, stadig, verlede. At morpheme or word boundaries (instances of sandhi) Le Roux and Pienaar (1927) and De Villiers and Ponelis (1987) site a few examples, viz.: nadie[na-ri]to the, (ek hou) daarvan[ra:fɑn]of it, dat die[dɑri]of it, nou die (dag)[nouri]the other day - note that the transcriptions are those of the cited authors.

In order to properly assess the nature of the variation of the Afrikaans [d] and the rhotic [r], we provide a short description of the articulatory and acoustic features of both. Note that in some respects one could rather see such variation as allophonic in nature, that is, /d/ has the allophone [r]

[+] The phonetics of the voiced alveolar stop /d/

Traditionally /d/, together with /b/, is described as a pre-voiced plosive (i.e. with a negative Voice Onset Time). Coetzee et al. (2014) show that especially in the speech of younger Afrikaans-speakers there is a lack of prevoicing. In the following discussion of the difference between [d] and [r] we only refer to cases where prevoicing is prevalent.

In Standard Afrikaans,  /r/  is a typical alveolar trill. In some varieties of Afrikaans it may also be a uvular trill, a uvular approximant, or a velar fricative ((Van Wyk, E.B. 1977); Le Roux and Pienaar 1927). A typical feature specification of the standard variety might be +sonorant, +coronal, +anterior, +voice, +trill. See The trill r for details, and references to further literature.

In intervocalic position, the trill /r/ is generally short, with only one up to three pulses being common (see The trill r.

In Table 1 the acoustic features are shown of the voiced alveolar plosive [d] ( Mandela in A), the alveolar rhotic trill [r] ( Barack in B), and the trill [r] derived from underlying /d/ ( nodig in C). The differences are important when one has to decide whether /d/ was realized by [r].

Figure 1 presents a direct comparison of the phoneme consonant /d/ realised as [d] and the allophone tril [r] in the word skade/skadə/. Compare these two with A and C, respectively, in Table 1. 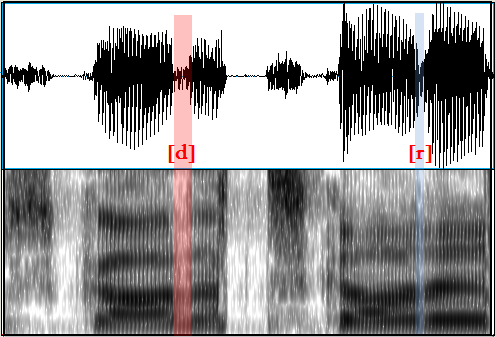 [click image to enlarge]
The sound in the following file accompanies this figure. It is somewhat stretched-out, so that especially the /d/ in the second sound is clearly heard as [r]:

Here a representative number of simplex words where intervocalic phonemic consonant /d/ exhibits regular alternation between [d] and [r] is provided. All examples have been retrieved from the RSG data set referred to in Introduction to phonological processes. This is a speech set obtained from news bulletins, read by prominent radio presenters; as such, it could be taken as well-groomed pronunciations of Afrikaans in a formal situation, loosely to be characterised as non-casual with respect to speech style.

In this section we first inspect the examples of rhotacism as cited in general text books (cited above) in terms of their Rule Application Probability index (RAP) - see Introduction to phonological processes. Note that the probability index is not provided in these works.

Only the following words cited above are found in the RSG-dataset: medisyne, middag, nodig, oorlede, predikant, skeiding, stadig, verlede. The RAP-indexes of these words range from 0.0 (medisyne, oorlede, skeiding, stadig), through 0.28 (gelede), 0.53 (middag) up to 0.61 (nodig). Where applicable, derivations of these words were also taken into account (e.g. stadige, vanmiddag, nodige). Note that some of the words of the original list are typically colloquial in nature (for example bidde, koddig and even padda), and thus unlikely to be present in a formal style such as news bulletins.

In the next section, a number of cases of rhotascism in single words that have not been reported before are listed. All of them are found in the RSG-dataset.

[+] Rhotascism in single words not reported before

For example, [d] in Cradock is quite clearly heard:

Rhotacism is, interestingly enough, seldomly acknowledged in the literature in cases of sandhi. Yet r-sandhi is widely present in Afrikaans, especially in casual speech, but also in more formal styles such as in radio newscasts, as will be shown in the following section.

Note that in all cases of rhotacism stress lies directly before the affected consonant /d/. Vowels following /d/ are mostly schwa.

Of the cases of rhotacism across morpheme and word boundaries mentioned above (na die, hou daarvan, dat die, nou die), only na die and dat die occur in the RSG-database. Both exhibit some instances of rhotacism, albeit to a limited extent. Apart from these, other examples of the kind toe diewhen the, het dithave it are present. Typically function words are involved; stress always lies on the first constituent, as is the case in when the process takes place word-internally . 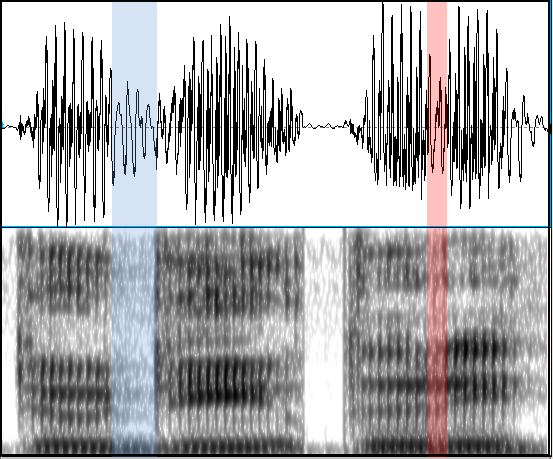 As in the other cases, the difference between the basic /d/ of toe die and its variant [r] of [tu ri] seems quite clear in this oscillogram.
[+] Domain specific factor

The role of familiarity in the realm of usage is exceptionally clear in the case of rhotacism. The appearance of this phenomenon specific but not in everyday contexts is striking. A word like sinodesynod is not unlikely to undergo rhotacism in conversations by clergymen, rendering [sə'nuərə]. The same applies to kodecode, i.e [kuərə] by cassiers in shops, asking for a pincode. Similarly, metodemethod is frequently heard as [mə'tuərə] in circles where methods of operating is customary, so is the case with misdade['məsdarə]crime within the realm of reporting in news bulletins.

Apart from the presence of cases of rhotacism as described above, that is in formal readings of news bulletins, is it clear that it is even more readily to be heard in less formal styles, especially in casual speech of day-to-day conversations. Notable is the fact that this variation between [d] and [r] is not restricted to certain individuals. This alternation appears intra-individually too.

X
Other topics with the keyword 'rhotacism'