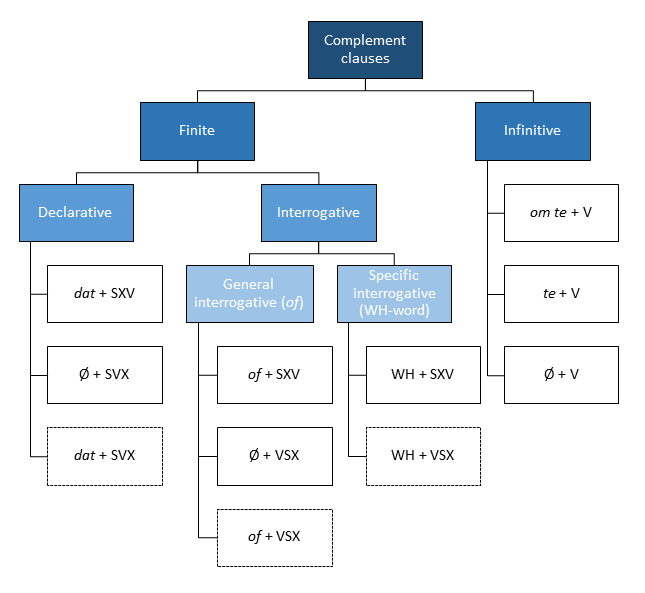 Afrikaans uses three different types of infinitive clauses. The full infinitive form (traditionally known as the long infinitive in the tradition of Afrikaans scholarship) makes use of the complementiseromin order and the particleteto, and is the most typical form for an object clause, as shown by (12). The bare infinitive (traditionally called the short infinitive in Afrikaans scholarship) only uses the infinitive form of the main verb, as in (13), where the governing verb probeertry and the complement clause that is the focus of the analysis are indicated in the syntactic analysis. A historical remnant from its Early Modern Dutch parent is the infinitive clause with the particlete, as shown by (14). It has restricted distribution in contemporary Afrikaans (Deumert 2004: 204-207).

Speech and thought can be reported directly in Afrikaans, most typically with the reporting clause following the reported clause, as shown by (15), or by means of an indirect report, where a main clause contains the reporting verb and a complement clause encodes the reported speech.

In addition, during the course of the discussion of these three parameters, the exposition will pay attention to two further types of association of the complement constructions:

This section provides an overview of how the parameters operate, and presents and compares the most typical and frequent constructions in Afrikaans for the purpose of illustration. More in-depth treatment is provided in the presentation of the individual constructions.

The first parameter is construction forms. In the various sections presenting the complement clauses in detail, a basic description of the syntactic and lexical categories involved in the construction is offered, as well as the word-order features characteristic of the specific construction.

There are two widespread word orders accepted as standard for finite declarative clauses: verb-final after the complementiserdat and verb-second if no complementiser is used. Example (4), with verb-final word order, can be analysed as follows:

If this sentence is used without the complementiser, the syntactic structure changes to verb-second order, shown in example (19):

The third, non-normative variant of finite declarative complement clauses uses the complementiserdat, but with verb-second word order, as the syntactic analysis in (20) shows.

With finite specific-interrogative complement clauses (yes/no questions), the verb-final word order is also selected after the complementiser of, as shown in example (21).

However, if no complementiser is used, then the complement clause takes a verb-first order like direct main-clause questions, with the inversion of the subject and verb, as in (22), although Feinauer (1989) points out that this variant is quite rare in her data.

The non-normative variant uses the complementiser of, combined with verb-first main order like direct main-clause questions. The form of this construction is exemplified in (23).

Infinitive complement clauses display limited word order variability. The full or long infinitive is always introduced by a complementiser, usuallyom, although variants withdeurby andten eindein order also occur, and the verb is always in the final position, immediately preceded by the infinitive particleteto. Other elements, such as direct objects or adjuncts are between the complementiser and the verb, as illustrated by (12) above, which is analysed as in (26):

Bare or short infinitive clauses have extremely limited syntactic options. According to Ponelis (1979: 431-432), apart from the infinitive verb itself, only a generic noun that functions as verb complement or a short adjunct is allowed, immediately preceding the verb as shown by example (27), where the bare infinitive functions as subject of the main clause:

While Afrikaans allows the use of complement clauses in subject position, it is more likely to use the extraposition construction with the dummy subjectDitIt in the initial position of the main clause (Bosch 1998:121), and the complement clause in its entirety moved to the position after the main clause, as illustrated in (36)-(38) where the subject clause is moved to the final position. The examples illustrate the extraposition of a finite declarative (36), finite general interrogative (37) and infinitive (38) complement clause respectively.

Lastly, complement clauses may fulfil the role of complementive (or subject predicative to a copular verb), as in (39). In these cases, the complement clause provides additional information about the subject of the main clause.

Complement clauses can also function as complements to other parts of speech, particularly as noun or adjective complements.

Complement clauses are not used freely, but are constrained by the semantics of the main-clause verb. Verbs from specific semantic classes typically take specific complement constructions, but are less frequently combined with others and may even be incompatible with some complement clause types. Verbs that denote communication or mental processes typically take finite complement clauses, and are therefore often employed in the function of reporting speech indirectly. There is a further constraint, in that a number of assertive verbs usually take finite declarative clauses, as illustrated by (40), while verbs that indicate uncertainty are more likely to take finite interrogative clauses, as illustrated by (41).

Verbs of causation often take full infinitive clauses, as shown by the verb forseerforce in example (42).

Below the most general or schematic level, a number of specific grammatical patterns emerge, where specific variants of constructions are associated closely with particular main-clause verbs. Such constructions are less schematic, or productive, than the more general complement constructions (of which they form a sub-construction). They can be regarded as characteristic usage patterns in Afrikaans that have a high degree of salience in the grammar and fulfil very specific functions. In the specific sections where the various complement clause types are discussed in detail, more comprehensive quantification and an analysis of the functions of these specific constructions are offered. By way of illustration, a small sample of such constructions is presented in (43) to (47), which are all based on the analysis of data from the Taalkommissiekorpus. The point is not that alternative formulations and combinations are not available to users of Afrikaans, but rather that speakers of Afrikaans use these options with considerably higher frequency than others, and they are likely to be prefabricated or idiomatic expressions that form part of the grammatical knowledge of speakers.

A number of fixed main-clause expressions can be identified among finite declarative complement clauses. Ek moet bieg (dat)I must confess that is one such salient fixed expression, as illustrated in (43). It has a strong preference for the modal moetmust, and demonstrates limited schematicity. For instance, the verb biegconfess infrequently combines with subjects other than the first-person singular pronoun.

The interrogative main clause WH dink jy (dat)WH do you think (that), illustrated in (44) is another specific construction that occurs very frequently, and serves a number of specialised functions. This corresponds in many ways to the Dutch construction WH denk u datWH do you think that, examined by Verhagen (2005).

During the presentation of the grammatical analysis, attention is given to the function of each form of complement clause. To give an overall sense of what is meant by function, two illustrations are offered here.

Finite, declarative complement clauses serve two related functions, which can be distinguished in terms of which part of a particular construal of reality (encoded by the main clause and subordinate clause respectively) is presented as the central claim in discourse. The two functions are the propositional and interpersonal functions. The propositional function is exemplified by (48).

The sentence starts with a dummy subjectditit which is expanded by an extraposed subject clausedat u moet begryp dat hierdie remedie 'n kontrakaksie isthat you must understand that this remedy is a contractual action. The embedded subject clause itself consists of a main clause and complement clause, and it is these two that illustrate the propositional use of the main clause, u moet begrypyou must understand. This clause makes a statement about the world, which is reinforced by the copula predicate of the independent main clause (van wesenlike belangof utmost importance). The complement clause within the embedded subject clause dat hierdie remedie 'n kontrakaksie isthat this remedy is a contractual action offers a subpart of the content of that statement by way of elaboration. The main clause of the embedded subject clause u moet begrypyou must understand is central to the unfolding of the discourse, and therefore performs a propositional function, rather than being backgrounded to the complement clause.

By contrast, in example (49), the complement clause ek was glad nie senuweeagtig nieI wasn't nervous at all makes the central statement, while the main clause en ek moet sêand I must say serves to ground that statement in the interpersonal interaction between the two communicative partners. The discourse centrality of the complement clause is clear from the content of the preceding sentence Hy het my gevra om 'n bal te slaanHe asked me to hit a ball, as well as the following adverbial clause al moes ek dit voor die wêreld se beste speler doeneven though I had to do it before the world's best player, which both deal with the speaker playing a tennis ball and how he was not nervous despite being watched by the world's best tennis player. There is no further continuation that relates to the speaker's saying, which in this case clearly does not denote an instance of reported speech, but simply an expression of stance.

A second illustration of the functional explanation is from the contrast between direct and indirect speech. In direct speech, a closer (or even verbatim) rendition of the original wording of a speaker is presented, which usually contributes to a more dramatic effect, but also shifts the responsibility for the veracity or felicity of the statement to the original source, rather than the person reporting. This is exemplified by (50), where the direct quotation is attributed to the original speaker, and is presented as his subjective assessment of his own preference, which the reporter does not necessarily share with him, nor does the reporter claim to be the source of this information.

In the case of indirect speech, a more interpreted and potentially summarised version of the original wording is offered, and there is a stronger sense that it is embedded in the discourse of the reporting speaker/writer, who assumes at least shared responsibility for the veracity of the statement. This is exemplified in (51), where the writer is more clearly aligned with the sentiment expressed by the magistrate, which is not a subjective opinion of a single individual, but a widely shared view.