Afrikaans syllable onsets consist maximally of three segments (C1C2C3); in native words C1 has to be an /s-/; C2 a voiceless plosive, and C3 a liquid sonorant consonant. Examples are given in the following table. Noteworthy is that /skr-/ clusters are normal in Afrikaans, whereas it only occurs in loanwords such as screen /skrin/ screen in Dutch. /sxr-/ in Dutch is replaced by /skr-/ in Afrikaans.

This onset template allows for three optional positions. C1 is always /s/; C2 is one of the voiceless non-fricative obstruents /p/, /t/ or /k/, and C3 one of the liquid sonorants /r/ or /l/, but not all combinations are possible. This approach does seem to capture the data presented above quite well; however, a few controversial issues remain. First, it proposes a ternary-branching onset structure, which is unexpected since all other constituents (e.g. rhymes, nuclei, codas, feet) are usually assumed to be binary branching structures maximally. Second, all of the onset sequences in the table above violate the sonority sequencing generalization(Clements 1990), which states that segment sequences in onsets should rise in sonority (see also Onset: sequences of two consonants). All of the examples above contain non-rising sequences, such as two obstruents followed by a sonorant. Third, there is no obvious reason why the first position should be restricted to /s/. In the topic dealt with this issue in the case of Dutch, an alternative approach is presented, whereby /s/ is treated as an appendix (Trommelen 1984:112) on the extrametricality of /s/ or extrametrical constituent (Halle and Vergnaud 1980), i.e. a position that is not part of the onset but connects directly to either the syllable node or the prosodic word node. By accepting this idea, the violation of the sonority sequencing generalization is avoided. This notion is rooted in the observation that Dutch also allows for extra-long consonant sequences at the end of prosodic words ('edge of constituent phenomena', see Moulton (1956) and Booij (1983). As illustrated in the words herfst /hɛrf-st/ autumn and promptst /prɔmp-tst/ most prompt, next to the maximally three positions of the rhyme, another three additional appendix positions are allowed, which can only be filled by coronals. Evidence for the relatively 'independent' appendix character of /s/ comes from the fact that all CC sequences in the sCC – clusters presented above constitute proper onset clusters of Dutch. However, if the /s/ was indeed fully independent, one could expect the /s/ to precede all possible Dutch onset clusters, which is not true (cf. e.g. /*sfl-/, /*sxl-/, /*skn-/).

Lubbe's (1987) proposal of (complex) phoneme sC- is another way of handling this issue, which will be incorporated into the subsequent section.

In the figure beneath the CCC onset structure is presented, with examples, comprising nuclei containing short and long vowels, as well as diphthongs. Note that coda is in brackets, indicating that it is an optional element of the Afrikaans syllable. The rhyme component is in curled brackets, which means that though it is an obligatory constituent of the Afrikaans rhyme, it is not taken into account here. 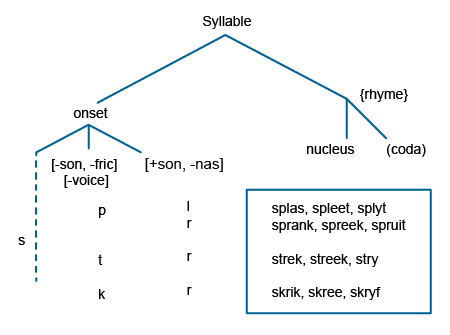 The consonant cluster /*stl-/ does not occur in Afrikaans; skl- only in loan words. Lubbe (1987) suggests for Afrikaans three complex phonemes, thus /sp/, /st/ and /sk/. Consequently the onset in Figure X will be merged to only two positions, viz. C1C2, where C1 = sC (i.e. /sp-/, /st-/, /sk-/), and C2 = l or r, rendering the following clusters, normally covering /spl-/, /spr-/, /str-/, /*stl-/, /skr-/ and /skl-/. Note that skl- is limited to a small number of words of foreign origin, e.g. sklera and sklerose. This means that, irrespective of the theoretical framework, the phonemic analysis of the phonotactics of Afrikaans as to onsets would be simplified to C and CC only.