Phonological processes (rules) mediate between underlying, basic phonological forms (constituted by strings of phonemes) on the one hand and surface, phonetic forms (constituted by strings of phones i.e. allophones of phonemes) on the other. In essence, such mediation implies that rules are optional. In theory then, obligatory rules do not exist. This section deals with the most important phonological processes of Afrikaans.

The overall goal of the Taalportaal project is the construction of a comprehensive and authoritative scientific grammar of Dutch, Frisian and Afrikaans. At the same time, the aim is not to operate strictly within a specific theoretical framework such as, for example, in the case of phonology, generative or optimality phonology. At the same time, the description of the phonology of Afrikaans (or any language for that matter) cannot be completely untheoretical and, in what follows, applicable reference is made to all available relevant literature on a specific topic, regardless of its theoretical heritage.

As an orientation with respect to all topics concerning the most important Afrikaans phonological processes, the following reference list should be consulted:

[+]The nature of phonological processes

As a demonstration of the nature and functioning of a phonological process, consider the following:

The coda consonant /n/ of the first syllable ( sin-) of the words sintaksis [səntɑksəs] syntax and sinchronies [səŋkronis] synchronic is realised differently, triggered by the place of articulation of the following consonant viz. alveolar in the first instance and velar in the second. In both cases, one can assume that these are two phonetic manifestations of the same basic phoneme viz. /n/. In order to express the different phonetic alternations or realizations found in examples like these, certain theoretical frameworks, notably forms of generative phonology, maintain that surface phonetic representations are derived by means of phonological rules from underlying representations (see figure below). As such, /n/ may be pronounced as [n], or, alternatively, as [ŋ] or [m] in derivations with in- in respectively intrap [əntrɑp] to step in, inkɔm [əŋkɔm] to come in and inpɑs [əmpɑs] to fit in. The same applies to prefixes like on-, aan- and van-. It also occurs frequently across word boundaries in sentence context.

This type of alternation, called homorganic nasal assimilation, affects consonant realizations. Similarly, vowels can be produced in more than one way, as in the case of their reduction, or in instances of unrounding. The vowel [ɑ] in kanon canon frequently reduces to schwa in [kənɔn]; the vowel [y] in nuus [nys] news is commonly unrounded, rendering [nis]. Other commonly observed processes that affect pronunciation are the raising, lowering and centralising of vowels, to be dealt with in other topics (see the index at the bottom of this page).

The following figure depicts the above-mentioned example of nasal assimilation. 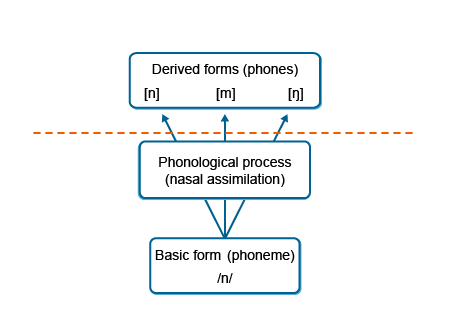 Some rules are more likely to be applied than others. To a large extent, the degree to which rules apply (expressed in terms of Rule Application Probability; RAP) depends on factors such as the nature of the speech style (casual rather than formal) or speech rate (rapid rather than slow). Labov (1972) defines casual speech, in contrast to formal speech, as everyday speech used in informal situations in which no special attention is paid to expression. Generally, casual speech is produced at a faster tempo than formal spoken language. High-speech tempo generally induces higher RAPs (Wissing and Van Dijkhorst, 2006). Other factors of importance for RAP are mentioned below. Consider the following examples regarding RAP, which varies on an index of 0.0 to 1.0: except in the case of extremely careful (slow) speech, identical consonants adjacent to each other are practically always realised as a single segment (thus RAP = 1.0), as explained further in Degemination. An example of the product of the Degemination Rule (sometimes called "amalgamation of identical consonants"), would be dis seker /dəs sekər/ pronounced as [dəsiəkər]. A rule like /d/-deletion, on the other hand, is not likely to be applied in careful speech in cases such as kinders /kəndərs/ [kəndərs], but most probably will appear in casual speech, resulting in [kənərs]. This means that the RAP of /d/-deletion will lie somewhere between 0.0 and 1.0. (cf. d-deletion).

The occurrence of the pronunciation of the demonstrative pronoun daardie /dardi/ that one in formal style [dardi] versus casual speech [dai] illustrates the impact of speech style perfectly. Speech rate could very well be a decisive factor: the RAP for [dai] will most probably be even higher in casual speech used at a high speaking tempo.

[+]Data sets used in all topics on phonological processes

Several data sets, comprising sound files and associated phonetic transcriptions of a diverse kind, were available for inspection and analysis, namely a) recordings since 2001, over a time span of more than six years, of news broadcasts read by a number of prominent radio presenters of RSG (Radio Sonder Grense, a nationwide Afrikaans radio station), containing nearly ten hours of speech; and b) two sets of readings (SALAR = South African Language Resources, collected as part of a joint research project with the University of Ghent, Belgium; 2001 – 2003) of a diverse collection of prose by 129 Afrikaans-speaking persons of different ages, totalling about X hours of sound. For (b), each person had to read a passage of about 100 words twice: first at a normal tempo (RAN = Read Afrikaans Normal), and then at a fast tempo (RAF = Read Afrikaans Fast). The RSG recordings are taken as representative of Standard Afrikaans, read in a formal mode. Note, however, that the readers were all professionally skilled and trained to read in a relaxed way that could be considered approaching a casual speaking style, not very unlike what might be considered General Afrikaans (see a discussion of the concepts Standard Afrikaans, General Afrikaans, formal and casual speech here).

[+]Factors which enhance the application of phonological processes

The probability of application of phonological rules is also sensitive to a number of factors other than speech style and rate. Some of the most well-known factors are listed below (1 – 6 are broadly linguistic categories; the rest relate to sociolinguistic characteristics):